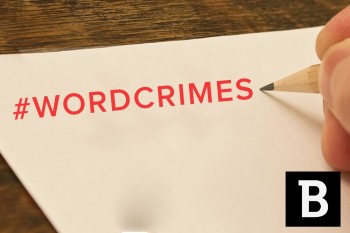 Weird Al isn’t the only one who gets irked by word crimes. At Brafton, our editors work through articles, blog posts, white papers and eBooks every week, so they’d be stretching the truth if they said they didn’t catch grammatical errors now and then – and some are more obnoxious than others.

Simple grammar mistakes can take a toll on your site’s credibility, so having an editor “who knocks,” as Editor Liam Green once said, is key.

Make sure you’re not guilty of the most common copy mistakes our editors face in the day-to-day. They’ve rounded up the top word crimes they’re sick of seeing:

Is “that” really necessary?

People overuse “that.” Say the sentence aloud. It will tell you if the word is necessary or mere filler. “That” is usually just a waste of space. Kimberly Killen

I think the thing that bothers me most is when writers treat companies like people in sentences – using words like “their” or “who” instead of “its.” A lot of us have done it, especially in our early writing, but it drives me absolutely crazy when I see it. I guess the opposite is also true – using “that” instead of “who” when talking about people. Kate McDonald

One of my biggest editing pet peeves is seeing ‘that’ and ‘who’ conflated, especially in regard to organizations. Regardless of what the Supreme Court says, companies are not people in a grammatical sense. Matt Kaplan

When you just can’t seem to agree

Oh man – nerding out over this post. Here are some of the “word crimes” I see the most often: Dangling modifiers, issues with singular/plural agreement and passive voice.  Grace Urban

All right, not ALRIGHT. No one, no one here is Matthew McConnaughey. Kimberly Killen

Botched use of colloquial expressions – “taken for granite” was a memorable example. Tracey Zielezinski

Though you may think this is correct, …

Do not start a sentence with “though.” The full word is “although”. There are places [that] it can be used, though. See what I did there?? Kimberly Killen

While editing, I always flag consecutive sentences that begin with the same word or phrasing. Let’s say you have a paragraph made up of three sentences. If each one begins with “The,” your audience is in for a pretty repetitious read. I also flag two or more consecutive paragraphs that start the same way. It just comes across as unimaginative writing. Chris Hassan

Commas, can be useful, sometimes

When a sentence is weakened by the structure

​Lately, I’ve been trying to slay the dragon that is passive voice. ​Lauren Hutchinson

Using that and which interchangeably

The that vs. which mistake drives me nuts – they don’t mean the same thing! Leslie Holz

Between a period and the start of the next sentence, do not put two spaces. You’re no longer 18 and trying to make a paper longer. Do you know how long it takes to highlight that space 30 times in one story?  Kimberly Killen

When you write about someone, and they turn into a group

A controversial error that I get borderline emotional about is the lack of consistency between singular and plural when sentences are in third person. For example: “When a customer wants something,they’ll reach out.” It should be, “…he or she will reach out.” I know there’s a school of thought that doesn’t see this as an error, but gosh, it drives me nuts! Ashley Greene

Lastly, this is for everyone. After you write an email, proof it. I don’t go on dates with people who cannot spell, so why would I trust them with my business? Kimberly Killen

And if you’re an admitted grammar nerd like us, be sure to check out Weird Al’s Word Crimes video: