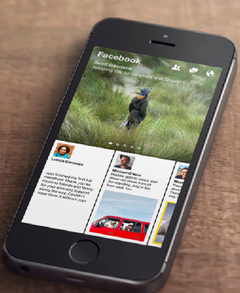 Lost in the 10 Year Anniversary Facebook videos (that nobody watched) last week was the launch of a new app.  Usually for the tenth anniversary it is customary to receive aluminium or tin as a gift, but Facebook decided to give itself “Paper” instead.

1. It is an app presently only available on the iPhone.
2. Paper, which resembles Flibpboard, is Facebook in a different shell that acts as a portal designed for millennials who may want the same stories and updates but presented in a newer way.
3. As Facebook recently added trending topics to the bevy of information on the news feed, Paper is a way to slow that all down and allow users to browse stories at a different pace.
4. Paper promises a de-emphasis on seeing content from individuals and more of an emphasis on seeing ‘stories’ grouped by category and author.
5. Paper is better at suggesting external content rather than relying only on what is suggested to you in a news feed.
Stay tuned: While paper was in development for a long time, the success or failure of it could signal other apps that allow for a variety of demographics to experience Facebook differently.