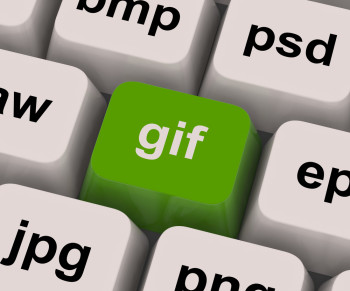 Retweets, shares and +1s are my bread and butter as a Social Media Associate; I’m a Redditor, too, on the constant hunt for karma – whether it’s for my clients or myself. So I’m always tracking the most engaging kinds of content on the internet, and there is one item that is a downright rockstar – the GIF.

Like cell phones or the internet, GIFs are a cultural phenomenon that nobody could have predicted. Popular across industries and conversations, these animated image loops are highly sharable and versatile. They are a trending content format that marketers should consider as a medium for sending their brand messages in new ways.

What is the GIF?

The GIF is not a new development. It is recently popular, but it is not new. Steve Wilhite invented the Graphics Interchange format, a bitmap image format, in 1987. Over the years it has been remodeled and innovated for a number of purposes. Perhaps most importantly for marketers, it can now be animated to form a low-resolution clip.

The GIF’s internet ubiquity is a testament to its sharability. Short and sweet, the GIF contains dynamic content that’s rich in meaning and rarely considered spammy. People like GIFs, plain and simple. They have a mystique about them – they’re like social media’s shiny toy.

But beyond popularity, visual information is easier to consume. Consider that GIFs are the most shared content on Google+.

Marketers who incorporate GIFs into their strategies can enter new forums that were previously difficult to access. Tumblr is a notoriously frustrating black hole for marketers, but it’s also a patron of the GIF’s rise to popularity. GE is one brand that has successfully entered the social media site. Reddit is standoffish to anything with a tinge of corporate, but contains hundreds of GIF related blogs or “subreddits,” begging for more original content: /r/gif, /r/reactiongifs, /r/cinemagraphs, etc.. Now marketers have some license to enter these zones.

GIFs are mini storytellers and great for calls to action. As Magdalena Georgieva notes, “The animated GIF is guiding the viewer’s eye along a specific path without being obtrusive… Such eye guidance is the essence of a good call-to-action.”

Once and for all, stop saying it wrong

Before I write GIF one more time, and you pronounce it wrong in your head, let’s clear the air: It’s pronounced with a soft g, as in “Jif” brand peanut butter. Steve Wilhite coined the name purposefully as a gag on the peanut butter brand’s tag line, “Choosy moms choose Jif,” saying, “Choosy developers choose GIF.”

The internet culture likes brief, to-the-point messages and new forms of communication, so online audiences have largely embraced the GIF. Rife on sites like Google+, Tumblr and Reddit, the format can be seen almost anywhere: On savvy businesses’ landing pages, in social media avatars, on advertising banners and recently, in myriads of list articles on sites like Buzzfeed, Mashable, etc. Marketers should find ways to bring their brand messages to life using GIFs and enter conversations taking place on these platforms.

A shallow dip in the pool of the GIF renders a fairly trivial scene of cute cats and nononono moments, and maybe that is its essence. But the GIF wears many hats. Seen across the internet in numerous forms, it becomes apparent that the GIF’s uses, whether official or unofficial, are many.

Perhaps the most well-known genre, reaction GIFs are a way to show responses and emotions. Using an animated clip, one can show absolutely anything – from the general: “Anger,” for example, to the highly situational: “When a young child is staring at me and their parent is facing the other way.”

The majority of reaction gifs come from film and television – I don’t know where a better visual repository of emotions could be found.

For marketing purposes, reaction gifs are a great supplement to customer service. I use them for my clients regularly when I respond to interactions on Twitter.

Here are some ways to leverage them:

GIFs are great highlight reels. Whether you want to see the knockout punch, stellar catch or ultimate fail, you can quickly and efficiently watch with a GIF. And, oh, it loops. Got a favorite movie clip? – GIF. Favorite sports feat? – GIF. Who wouldn’t want to keep a moment forever, right?

Try replay gifs to stay current (Note that using GIFs in general is already the “in” thing to do these days):

Put on your French accent, this GIF genre is fancy. Cinemagraphs are part picture, part animation. With only one or two, usually subtle areas of motion like distant waterfalls or city streets, these GIFs tend to have a serene, peaceful quality. Thanks to visual effects, one feels that time is passing as opposed to a moment replaying.

For its discretion and subtlety, the cinemagraph is a favorite form of GIF for advertisers in the travel and fashion industries. Due to their complexities, these GIFs require more editing savvy and panache, and certainly a tripod.

Use them to promote scenic destinations included in a travel package:

Peripherally related to the cinemagraph is the perfect looping GIF. The principles of this type are well known for their use in apps like Vine.

The gist: make a GIF that runs seamlessly, with the last frame running back into the first frame. These GIFs tend to have a mesmerizing effect and often share with the cinemagraph a sense of time elapsing.

Some possibilities for perfect-loop GIFs:

Make something boring not boring with a GIF! Technical gifs are ways of making things like graphs, stats and diagrams more dynamic and engaging.

Technical GIFs are a good for marketers who want to:

It’s easy! The GIF does much of the marketing legwork for you because people just plain like them. Reddit user that I am, I decided to give GIF creation whirl to do some hands on research for this article, and guess what? I got to the front page after a few attempts—woo karma! My efforts to attain this feat were minimal, showing how high the potential for GIFs really is.

There are free GIF creation tools, like a desktop app called GifCam, but there are many other tools out there for making GIFs on the web or on mobile like imgflip, picasion, and GifBoom – each has its own pros and cons. Ultimately, if you try your hand at making GIFs yourself, you’ll find there is no real golden child GIF creation platform yet. It’s a good start if you can use original graphics and call on production teams to handle PhotoShop for you, and – of course – I recommend having a social media marketing team who’s ready to deploy them for maximum impact.