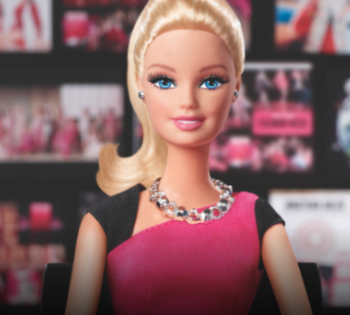 There’s a new professional on LinkedIn and she’s sporting some pink glitter. Don’t be fooled by her resume’s glitzy appearance – her career experience across 150 professions goes unmatched. Who else do you know who’s been an astronaut, doctor and a presidential nominee (twice!)? We’re talking about Barbara Millicent Roberts, better known worldwide as Barbie.

The reason behind her LinkedIn sign up? With a new professional title, “Dream Incubator,” this entrepreneur Barbie is on a mission to “help girls around the world play out their imaginations.”

Barbie and her partners at Mattel are hoping to foster engagement with the kids who enjoy playing with the doll, but also with the community at large. Her LinkedIn debut can be considered a powerful content marketing tactic that, if successful, will get everyone on Barbie’s side. She’s preaching leadership, ambition and gender equality – who wouldn’t want to be part of that mission?

Despite the silliness that a plastic doll is honing a LinkedIn presence, there’s a marketing message to be heard. Here are some reasons why Barbie’s appearance on LinkedIn isn’t as crazy as it seems at first:

She picked the right network

Fictional characters are all over social media, but few have picked up on the professional tone of LinkedIn. For Barbie, who’s already shared projects like ‘Tips from Chief Inspiration Officers’ and ‘Best Business Secrets,’ LinkedIn was the perfect choice. LinkedIn is considered the premier professional network and it’s where content revolutionaries flock for business information and inspiration. If Barbie can successfully deploy content that serves these purposes, her LinkedIn page could be a go-to for young professional women.

She’s building a personal brand for her company

Even though she is a fictional character, its an opportunity to convey some of Mattel’s values and business savvy without the organization running the campaign on its own. Who would you rather read a blog by: Mattel or Barbie?

The Dream Incubator campaign is in partnership with several female-run successful businesses including Rent the Runway, Girls Who Code and Sugarfina. Mattel has carefully positioned Barbie among a group of women who have proven success across industries – if these leaders take Barbie seriously, perhaps we all should.

Isn’t that the whole point of content – engagement and entertainment? This is a clear example of good storytelling. Stringing together all of Barbie’s careers has made them relevant to the women who had one of these dolls.

Still, the message has missed the mark for some.

Alexandria Batdorf, CMO at ZipFit said on Forbes that “dream incubator” Barbie is an unrealistic portrayal of corporate America in 2014 – “If entrepreneur Barbie were dressed up in a casual t-shirt, jeans, and came with diverse wardrobe pieces and accessories allowing the girl buying her to dress her up and accessorize her as she pleases, that would best represent female entrepreneurs.”

Despite the mixed feelings toward Barbie’s debut on the network, she’s already has upwards of 4,000 followers. So, we want to know what you think – is LinkedIn a good place for fictional characters boasting career advice? Would you follow Barbie on LinkedIn?