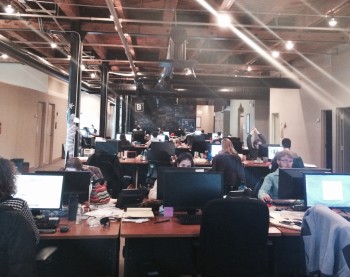 Can a city claim to corner the market on quality content? The bustle of New York City media often contributes to its current recognition as a hub of American journalism, and the city’s association with the field dates back to Columbia’s formal introduction of journalistic studies in 1912. But the web has democratized the pace of the writing profession. What’s more is that many forget the University of Missouri opened one of the world’s first journalism programs in 1908, launching a tradition of editorial quality standards out West.

Today, Chicago is home to about half the number of professional journalists of NYC, though the Windy City’s writing demographic makes up a much larger share of the city’s overall populace. (The population of Chicago is less than one-third of that in The Big Apple.) Chicago has six accredited journalism schools, while New York and Los Angeles each have four.

These facts don’t discredit the undeniable editorial prowess of Americans across the nation, but they highlight why we at Brafton felt Chicago was a good city to continue to corner the market on quality content marketing. In 2011 our Chicago office was launched by a team of three to expand our editorial operation- led by Senior Director of Content James Conroy, who holds a journalism degree, himself.

Now, two years since its inception, the Chicago office has grown more than 2,000 percent.

“It’s amazing,” Conroy said. “To think we started in a very small office with only three employees on day one and a little more than two years later we’re approaching 100 employees, including graphics, video, human resource and account management department.”

Growing a team and trading up office space(s)

While Brafton Chicago is a predominantly editorial office, its growth has mir rored our one-team approach for strategy and content: writers, graphic designers, video producers and content marketing strategists, as well as a human resources department are among our Windy City ranks. As the staff continues to expand, we’ve needed to move to a larger office – several times over. Originally launched in a modest 46th floor office on South Riverside Plaza, the Chicago team moved four times before settling into our new space in an industrial, lofted office on N. Clinton Street in February 2013. (We’re a short walk from both the Chicago Tribune headquarters and the Google Chicago office.)

“It was an exciting time; we kept moving because we needed more space,” explains Content Marketing Manager Michael Bratschi. Like Conroy, Bratschi had been working in Brafton’s Boston office when he moved to Chicago to help develop the team of Midwest strategists.

At N. Clinton, Braftonians have made their new house feel like home: Overlooking the large editorial loft we’ve erected a gigantic chalkboard wall full of team reminders, creative word associations, upcoming events and Brafton doodles of pride. For those moments when writers and consultants need a break there’s also a game room, complete with foosball, a Wii, N64 and more. When Brafton first moved to N. Clinton Street, the team was already serving hundreds of clients and keeping up with company-wide industry trainings. Bratschi took the lead in developing a new initiative for Chicagoans to feel a sense of community both in and out of the office. He said it started off as more of a “necessity” committee, where the team would meet to tackle everything from Chi-town content marketing meetups to around-the-office projects, like bringing in plants and livening up the game room.

Now, the committee has grown from necessity to fun, hosting activities including weekly kickball, poker nights, a killer Halloween costume party and a community blood drive.

Successfully blurring the line between work and play, the committee has also launched a weekly “Bagels and Banter” meeting. Every Friday, team members from different industry sections and departments are selected to share breakfast, marketing insights, SEO best practices, writing tips and fun facts about themselves. (This will soon to be adopted company-wide, though the Boston office may vote to call it “Content and Coffee” in line with our weekly web video series...)

Despite the long distant relationships, connections between the Boston, Chicago, and San Francisco offices remain tight. We make it a priority to deliver consistent and positive experiences for clients across North America, and to give each other support as a content marketing community that knows no geographical bounds.

“I talk to people from all of our offices every single day,” Chicago Managing Editor Evelyn Ratigan said. It helps that a considerable share of the Chicago managing team has roots in Brafton’s Boston headquarters. Ratigan and fellow Chicago managing editor Jason Segarra both began their careers with Brafton in Boston, but seized the opportunity to further develop their expertise while exploring a new city. At the same time, we’ve found the city has a large pool of exceptionally creative professionals who add their own character to our company.

“In the past year the Chicago office has just grown exponentially,” Ratigan said. “I think we’re twice the size we were – but the atmosphere remains very close-knit. I work for my clients, and also for my writers and editors who are such excellent people at work and in life. They’re really the motivation for me to come in every day.”

We’re not saying Chicago owns modern-day quality content, but our Chi team is certainly helping us keep the lead in content marketing.