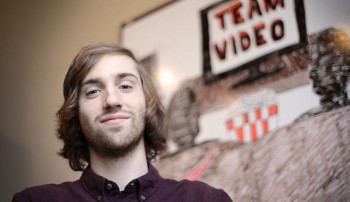 When Thomas was a kid he wanted to be an inventor, specifically Rick Moranis in “Honey, I Shrunk the Kids.” That didn’t happen, per se, but Thomas says he views the art of video animation as a form of invention – so we’re happy that his childhood dream has (sort of) come true.

“As a kid, I would always build things or take motors out of broken electronics and create something new from it,” he explained. “As I got older, this transitioned to things like composing music and designing. Animation isn’t really too far off from that idea – I still view it as inventing.”

At Brafton, aside from perfecting his animation skills, Thomas says he’s learned a lot in terms of communication. This has been important, since our video team spans two offices – in Boston and Chicago, where Thomas works.

“Thomas has an incredible work ethic and continuously produces fresh and creative animations,” Cameron Leahy, his teammate in Chicago, said. “His eye for design and ability to problem solve is an amazing asset to the video team.  I’d say it’s directly related to all of the classical music he listens to.”

Take a look at one of Thomas’ recent animations:

Learn more about Thomas in our Brafton Q&A:

I think the most important quality for success is persistence. I believe we all have a natural talent of some kind and we should pursue those talents and passions, but anyone can be great at something depending on their

level of persistence. There is no limit to how good we can be at something.

I value creativity. I think as an animator or designer it’s extremely important to have environments and resources that cater to our creativity.

Probably my guitar. I had to stay at a friends apartment for two weeks before moving into my apartment and I went through some serious withdrawals. It happens on vacations too.

There are always new projects. Thomas was the winner of Brafton’s 2013 Halloween Contest.

It’s not that “hidden,” but most people probably don’t know that I can play multiple instruments – guitar, piano, drums, anything with strings.

“Twin Peaks” comes to mind. If Brafton were Twin Peaks I would consider myself Special Agent Dale Cooper mainly based off his obsession with black coffee. I frequent the Keurig and prefer my coffee “as black as midnight on a moonless night.”

We’re hiring video animators and producers! Check out our career opportunities in Boston and Chicago.