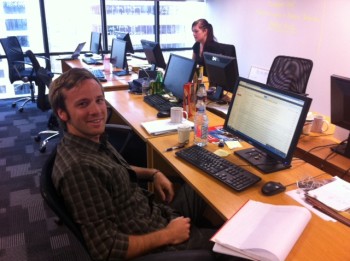 As Brafton continues to develop innovative approaches to the maturing content landscape, having an international perspective on the market is beneficial. Brafton’s partnership with Castleford, our sister agency with locations in Australia and New Zealand, allows us to keep a pulse on the international content industry. The partnership has created great opportunities for tenured Braftonians looking to develop their professional experience while also exploring a new country.

Castleford has helped to spearhead the growth of the content marketing industry, much like Brafton in North America. With a newly implemented, sophisticated broadband infrastructure regionwide and more Aussies online than ever before, Castleford Director Adam Barber said “Australia is an up-and-coming region for content marketing excellence.”

Several of Brafton’s seasoned editorial team members have had opportunities to apply for positions at our sister agency down under. Take, for example, writer Chris Davis.Chris had been working at Brafton for a year, having earned a lead writer role, when he first heard about the chance to work abroad at Castleford. Native to Texas, Chris had come to Brafton’s Boston office as a recent college grad, excited for the opportunity to have a salaried position in his field of study. Not knowing anyone in the Boston area, Chris’s Brafton peers quickly became a “great circle of friends,” something he said he’s very grateful for.

Chris knew he wanted to travel and  gain professional experience in a foreign country at some point, but the logistics of relocating to a new continent were intimidating at first.

When CEO Richard Pattinson posted an internal job posting, alerting employees that Castleford was recruiting writers and aspiring team leaders to help further its growth in 2013, it seemed to be the perfect opportunity. Six-month and year-long positions were available for Braftonians at Castleford’s offices in New Zealand and Australia.

Joining the editorial floor Down Under Now, six months into his Castleford adventure, Chris has no regrets.

“New Zealand truly has been amazing,” he said. “It’s one of the most beautiful counties I’ve ever seen, and every weekend I try to go on some sort of outdoors adventure. It has been an invaluable experience and it’s challenged me, which I’m sure will be good for me in the long run.”

Minus adding U’s to words and replacing Z with S, Chris said most components of the Castleford editorial floor mirror Brafton’s model. The editorial team, like Brafton’s, has matured from a small pool of writers to several news desks, overseen by another Brafton transplant: Amanda Gross.

Amanda also began in Brafton’s Boston office as a news and content writer. She set out to explore New Zealand in June of 2013.

“Brafton created more opportunities for expansion in editorial, which served me well because I was promoted to senior writer,” Amanda said of her experiences before travelling with the company. “In my senior writer role I’ve gotten to taste what management is like and it’s made me realize that that’s something I really want in my career. This positioned me to go ahead and take a management role in Auckland.”

The biggest takeaway Chris took from Brafton down to New Zealand? Discipline.

“If you can tell yourself that you don’t HAVE to look at that listicle full of animal Gifs until lunch, you’ll get a lot more done,” he said. “And I would much rather finish at 5:30 p.m. and go spend my night at the beach than drag it on by looking at things on my computer screen I won’t remember at the end of the day anyway. When I’m here, I do the best I can while I’m at work, and then the best I can when I’m not at work.”

Some of the most memorable things he’s done outside the office since he arrived in New Zealand? Weekend expeditions have included: Driving cars through rivers and on beaches, camping in the mountains, swimming beneath waterfalls, exploring caves, mountain biking through forests and hanging out in geothermal hot pools.

And while Chris said he misses cracking jokes with Brafton’s editorial team, his experiences at Castleford have been unparalleled.

“There is no replacement for what travel can do to help people learn more about themselves, what they want in life, what they’re good at, what they suck at and so many other things,” he said. “If anyone else decides to come over, I’d tell them just be flexible, understand homesickness is inevitable, but strive to make the most of every day.”