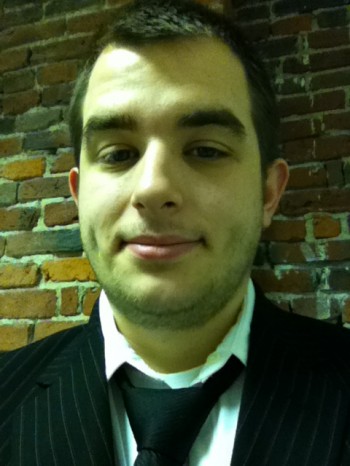 When Bob McHugh started in April 2012 as a database marketing executive, he had no idea he would be gearing up for a major career shift two short years later. But, when he shadowed several departments to get a feel for what his next steps should be, it was love at first site with our social media department.

The way Bob explained it, working in social media borrows what’s great about nearly every other department at Brafton.

“I loved the puzzle-solving that goes into being a content marketing strategist, and you utilize the same strategy when crafting the perfect social media plan for a particular, unique client,” he said. “It also combines the writing and communication from editorial, and the ability to see statistical, objective improvements in the results from your labors that I received from database marketing.”

Initially Bob came to Brafton while he was pursuing a master’s in creative writing. He said his ideal career would be “ rewarding but not one that was so creatively draining that I would never want to write in my free time.”

Social Media fit the bill because he has the opportunity to flex his creative muscles crafting the perfect Tweet.

“I’m surrounded by such energetic, passionate people that I never leave work feeling anything other than revitalized,” Bob said. “Because social media is so clearly the platform of communication for the modern era, it’s great to have a position that allows me to be a part of that conversation.”

Learn more about Bob in our Brafton Q&A:

I wanted to work in a movie rental store. I coveted a spot on the “our staff recommends” section as a kid that I would constantly switch out the employee selections with my own. I’m sure the staff was baffled by the video vigilante that kept replacing Citizen Kane with a copy of  It’s Pat.

Q: What do you think is the most important quality for professional success?

Perseverance. No comedian destroys on his first time in front of an audience, no basketball player slugs a touchdown on his first at-bat, and no Bob crafts a successful metaphor on his first attempt at an answer in a questionnaire. It’s the dogged insistence that you’re going to keep trying anyway that makes you great at any endeavor. Seeing tangible results for the work I’ve put in. In every hobby I love (writing, cooking, painting), you get a product when you’ve completed your project. It’s fantastic knowing you’ve created something and get to see the culmination of your efforts.

My pizza stone. Without it, I would make aesthetically unpleasing rectangular pizzas and would be forced to reckon with the school lunch lady who lurks within my heart.

I’m always thriving to be more clear and direct in my communication. Communicating honestly and sincerely with another person is one of the most important things you can do, so any time a joke or an esoteric reference obscures meaning instead of enhancing it, you’ve done a disservice.

Monday. I love the fresh start for the week Mondays provide, so every Monday is like January 1 for me (that’s 52 cancelled and renewed gym memberships a year!).

Through social media I get to interact with thousands of people each day. I also love the creativity I get to employ on a daily basis.

I won a years supply of drink mixers from a Comedy Central joke contest when I was 12. I’ve also had the good fortune to have my fiction published in a few literary journals.

When I was a child: Butters from South Park
When I was a teenager: Landry from Friday Night Lights
Now: My co-workers have (not so) charitably suggested Tim the Toolman Taylor and Tobias Funke when I just asked them. Thanks guys!

Learn more about the job opportunities available at Brafton here.