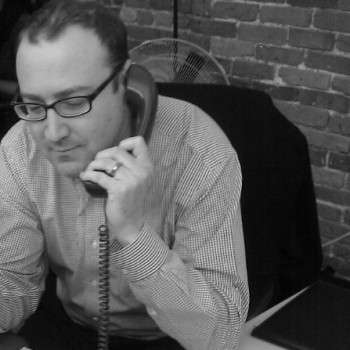 Chief Sales and Marketing Officer Allen Schweitzer said it best when he described Sean Greene’s approach to his role as a Brafton sales director:

“He never compromises on what’s needed to achieve results. He’d sooner walk away from a conversation than engage in an agreement that isn’t set up for success. I think that brings a lot of credibility to Sean, his team and to Brafton as a whole.”

Flash back to 2010 and Sean Greene was just starting on the Brafton sales team a business development executive, with several years sales experience under his belt from AYR1 and DMX Group. At first, he saw Brafton as an opportunity to join a growing industry. But when he learned more about the scope of products and services Brafton was offering, he knew he was setting himself up for success.

“I took the role of Business Development Executive simply for the overall opportunity to join a rapidly growing company, promoting a product and service that was incredibly exciting to me,” Sean said.

Now, four years and one big promotion to sales director later, Sean Greene is known around the office for his work-hard mentality and no-nonsense one-liners. Sean’s directness fosters open communication among his team and helps him onboard customers who know what to expect. His approach is simple: he’s an excellent listener. He takes pride in understanding each customer’s unique circumstances and specific goals.

“He has a passion for Brafton, a passion for content marketing and he brings that passion to every conversation and every meeting he attends,” Allen said.

Learn more about Sean in our Brafton Q&A:

HA. At one point a stock broker, at another a writer (yes!) and into my high school years, a professional musician (ok, fine – a full-blown rockstar). I pursued my dream in going to Berklee and actually had a really good run with a local ska band, making a few records, touring and developing a nice little fan base for several years in the mid-90s.

You may be the most talented guy in the room but you still gotta PROVE it. And then you need to keep proving it day in and day out. The day I start phoning it in or resting on my laurels, I’m done. There’s always gotta be a fire.

In recent years I consider a sentiment from Brafton Company Director Tom Agnew that – like most good advice- I consider incredibly simple and ridiculously obvious, it’s just a matter of hearing someone you respect say it out loud.

“I don’t know anyone who’s incredibly successful at a job who doesn’t completely work his tail off.”

“The day I start phoning it in or resting on my laurels, I’m done. There’s always gotta be a fire.”

For the record, that’s not a direct quote – but that was my interpretation of it…and he’s absolutely right.  If I’m not wiped out at the end of each day, I’ve phoned it in and I need to do a better job tomorrow.

Challenge in my roles and respect from my peers and management. You can find jobs with one or the other, but neither quality would work for me long term without both.

Hmm.  I don’t supposed my kids and wife are “possessions” but they’re certainly the reason why I do what I do each day and that which I’m most proud of when I think of this question.

If we’re talking tangibles – I’m going with my TV.  It’s an absolutely necessity for me to decompress at the end of the day with some “House Of Cards” or “Walking Dead”.

Patience is a virtue, they say.  I’m always working on that one.

Mondays or Fridays.  Mondays for planning and forecast for the week, Fridays to (hopefully) see all that planning come to fruition.

It’s never boring. I love the services we sell and the people I work with.

My two kids, Baxter and Emmet are easily my greatest achievement. Nothing else even comes close. No so much “hidden” but I perform regularly in a party band called “Played Out.”  Between occasional shows at local clubs and a handful of weddings each year, I have a ton of fun and it helps me stay true to my roots.

Tom Colicchio of Top Chef.  Ask anyone who’s worked around me – all I do is criticize everything everyone eats.  And, I’m losing my hair…