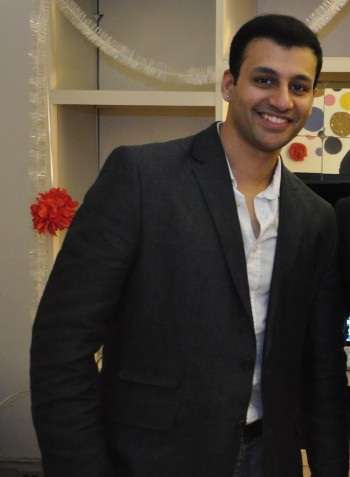 These days, social media is playing a big role in Sumit Sharma’s life, both inside and outside the office.

When he joined the Brafton team in the summer of 2011 as a database marketer, Sumit admits he had his eye on our social media team from the start. An active YouTuber also known around the office for his love of selfies, Sumit appreciates the versatility and fast pace of the social media sphere: The industry’s constant changes present a challenge he appreciates.

“When I started at Brafton I was able to shadow all the departments and see how they work,” Sumit said. “I felt pulled towards social from day one.”

Once he joined the team in 2012, both he and his managers knew he’d found his sweet spot.

“Since Sumit started on the social team, he’s been so proactive with his accounts, constantly consulting with clients and offering advice to improve their strategies,” Social Media Manager Kristen Fritz said. “He’s also no stranger to hosting training sessions with new social media hires and interns. We’re extremely happy he’s on our team!” We can’t go without mentioning that on top of stellar work for customers, Sumit is somewhat of a social media sensation himself. This past month, Sumit entered a Facebook contest hosted by Boston food truck favorite, Chicken and Rice Guys, where the winner would receive 10 free meals. Sumit won, and decided to donate each of his 10 free meals to the homeless.

Chicken and Rice Guys’ owners were so impressed with his selflessness that they declared Sumit the first-ever “Chicken and Rice Guys Give-Awayer.” This means he can go to the food truck any time for free food (to eat or share). His act of kindness was highlighted on the food truck’s social platforms, and Sumit’s growing fan base has posted notes of praise across the web.

“Sumit is a really humble, caring person around the office, and it’s cool to see his generosity go further,” Kristen said. “I think the example he set with giving away his Chicken and Rice Guys meals is incredible, and the organic following shows the power of being genuine on social. We can all learn a little something from it.”

Learn more about Sumit in our Brafton Q&A:

I wanted to be an actor or a singer. Not a lot of people know this about me –  I was the lead singer in an Indian classical band for almost five years during college. I also did a little bit of modeling as a teenager, and was featured in some local magazines. Basically, I was almost famous.

Pride in your work. If you take pride in what you do, you will make sure that you go above and beyond to achieve maximum results. As president Calvin Coolidge once said, “No person was ever honored for what he received. Honor has been the reward for what he gave.”

Supportive managers: I have been blessed with great managers. They are always willing to help me out with anything and they always motivate me to grow as a professional.

Q:  What is your most treasured possession?

My Guitar!  My dad gifted me a Yamaha Classical Guitar about three years ago on my birthday. I am still trying to get better at it, but hopefully I will come up with an album someday. Sumit and his social media teammates.

Compassion. I feel cultivating compassion into your personality is very crucial for immediate and long-term happiness.

Thursday. It’s almost Friday and I like to finish strong.

Creative freedom: My job allows me to try new things everyday. I work with a wide variety of industries, and coming up with new social media strategies for different clients is my favorite part.

Youtube – I am an active YouTuber and upload my Bollywood covers from time to time.

Becoming the designated Give-Awayer for Boston food truck company “Chicken and Rice Guys” is an honor. Now I can provide food to people in need anytime. I think that is pretty neat!

Not that hidden, but I can dance really well. Also, I can “bark” exactly like a dog, if you call that a talent.

I think I am “Major Nelson” from “I Dream of Jeannie”. I also relate to “Raj” from “Big Bang Theory” as we are from the same city.