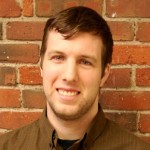 Video Production Coordinator Tim Griffin joined the Brafton team before our video marketing offerings had made their way into Brafton’s content catalogue as a high-demand staple.

Originally a news and content writer, Tim began his career at Brafton in April, 2010, working his way through the editorial floor to become Finance Editor. In that position, he had his first taste of video production at Brafton, writing scripts for the company’s first-ever video clients. But don’t think Tim was a stranger to video production: he joined Brafton from Boston news network WHDH, where he wrote news copy and selected video footage for the station’s daily newscasts.

Known by Brafton colleagues for innovative problem-solving, it’s no surprise that Tim was able to design a new role for himself through hard work: Brafton’s video production coordinator.

“When I started with the video team there wasn’t really an open position, I just created it and started laying the framework for it to expand,” he said. “I wasn’t sure where video was going to lead me, but I knew it would be fun and I was ready for a change.”

Now, a key component to Brafton’s video success, Tim appreciates the versatility of his role, and that he gets to “contribute to a lot of really cool videos.”

“Nicknamed ‘The Rock of Video’, Tim has a crucial role within the video team: coordinating production and guiding our clients through the video production process for every single video we produce,” Video Production Manager Perry Leenhouts said. “Tim’s dedication and work ethic is unmatched, and I have yet to encounter a person who can communicate as diplomatically as Tim.”

Learn more about Tim in our Brafton Q&A:

Q: As a kid, what did you want to be when you grew up?
I think I wanted to be a baseball player growing up, but that died when I realized I had little to no actual athletic talent.

Q: What do you think is the most important quality you need to have for success?
I think you need to be able to think on your feet and change directions when needed. You can plan all you want, but your plans are likely to need adjustments before you finish.

Q: What do you value most in a job?
I think a good job – one you stay in for a career and not just a stepping stone – needs to give you upward mobility while also allowing you to maintain an effective work/life balance. Can’t think of anything specific actually. My house?

Q: What personality trait are you always trying to improve?
My forcefulness. Sometimes I’m “too patient” with people.

Q: Which day of the work week are you the most productive?
Tends to actually be Mondays somehow. No idea how.

Q: What do you consider your greatest achievement?
I guess in life I’d say I’m most proud of some of the theatre-related stuff I’ve done in the past. At Brafton, I think I still look back at some of the white papers I wrote with pride.

Q: Have any “hidden talents” ?
It’s not necessarily ‘hidden’, but not too many people know I write poetry sometimes.

Q: If Brafton was a TV show, which character – from any sitcom, drama or reality show (of any time period) – would represent you?
Jerry Seinfeld? I tend to be sarcastic and a lot of people tend to act like Kramer throughout the day.

Learn more about the job opportunities available at Brafton here.