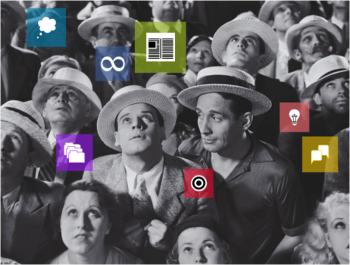 Experimental writers have forever embraced new forms of construction in an effort to draft works that are both novel and speak to some form of expression necessitated by a social condition that demands a new voice. Whether through fiction, nonfiction, poetry or something in between, these artists are often credited with the development of a mode or process that readers and critics say is new, reflexive and definitive.

As written communication has evolved, the question of how content is disseminated has become a central consideration for people who create.

Content marketers today deal in a currency that includes a variety of forms of communication – text, graphics, video etc. – and their professional concerns should monitor the social and artistic evolution of communication both online and in the real-world, because increasingly, lines between promotion, marketing and writing are blurred. By addressing the evolution of media, the relationship between a marketer or a writer and his or her work loses an element of focus while gaining a unique and comprehensive commercial and social perspective.

Euripides and a landing page walk into a bar.

Content marketers who evolve their work to echo a social voice or address a new audience share more with artists than one may think. Poets like Walt Whitman, Alan Ginsberg and John Berryman used differing techniques to speak to an evolving American perspective. Experimental writers like Andre Breton and Gertrude Stein used non-narrative techniques to tell stories without actually trying to tell stories. Aeschylus, Sophocles and the way-ahead-of-his-time Eurpides brought revolutionary practices to theater to explore major human moral and psychological themes. The Romans, for their part, pretty much invented dirty jokes.

In conjunction with changes in methodology, style and subject matter, as written communication has evolved, the question of how content is disseminated has become a central consideration for people who create. The publication landscape has been important all along (Johannes Gutenberg was kind of a big deal), and most recently, the exponential growth and evolution of media has bred a new way of thinking about art and communication. In 2009, Jane Friedman, the former president and CEO of HarperCollins formed a digital publishing company called Open Road Integrated Media (ORIM). Friedman told The New York Times that the publishing industry as it exists “is built on models that we all know are broken,” and through a series of initiatives, she hoped to inject books with some energy.

Friedman’s plans involved reissuing classic print novels as ebooks, encouraging unpublished authors to self-publish on a digital platform, embracing multimedia ventures that gave published works context (The Times noted one documentary film about an author that would be made available at the time his novel was e-published) and promotion of books with well-resourced, viable content marketing strategies that included blog posts and social media campaigns. Open Road Integrated Media’s website says:

“Open Road creates connections between authors and their audiences by marketing its ebooks through a new proprietary online platform, which uses premium video content and social media.”

This is not exactly a novel approach to the promotion of reading. Billy Collins, Poet Laureate of the United States between 2001 and 2003, created the Poetry 180 initiative, which provided U.S. High School students with one essential poem for every day of the school year. In 1996, the Academy of American Poets named April National Poetry Month. As programs like these have evolved, social media services like Twitter and Facebook, along with blogs, have helped increase and track participation, and both initiatives have proven successful.

What’s novel is that Collins, the AAP and Ms. Friedman are all redefining their currency as a “thing.” As critics shunned words like “novel” and “book” in favor of “text” in the 1950s and ’60s, today, we’re seeing literary marketers identifying texts, old and new, as products deserving of the methods that help consumers so comprehensively embrace everything else in the world. This is, admittedly, both exciting and somewhat troubling.

“The real work is in marketing the titles.”

Yet despite these successes, there remains some tension between established artistic models and online content marketing strategists. Poet and founding editor of the small press Publishing Genius, Adam Robinson, noted in HTMLGiant the significance of the fact that Friedman’s ORIM calls itself, and is, at its heart, a content marketing company. Robinson, as an operator of a small press, was skeptical of the company’s veracity as a publisher per se.

While many writers and artists embrace new media and marketers realize its seemingly endless reach, some traditional marketers, publishers or general distributors and disseminators wonder if the model will hold water.

The existing works the company sought to “publish” (the most recognizable of which, in 2009, was Joseph Heller’s Catch-22) were, as Robinson put it: “old books which are, you know, like already typed up and stuff, and maybe mostly public domain (I dunno), and don’t need to be manufactured etc.”

Suffice it to say that while many writers and artists embrace new media and marketers realize its seemingly endless reach capabilities, some traditional marketers, publishers or general distributors and disseminators wonder if the model will hold water.With regard to the company’s interest in self-publishing, Robinson again notes the fact that ORIM is a marketing machine, not a publisher: “…if they also publish my self-published book, either my book isn’t self-published or they aren’t publishers.”

What’s interesting about the independent small press scene is that as a mode, strong content marketing strategies will help it succeed. With a definable, targetable audience and clear goals, the success of small-press publications can be greatly aided by a good content strategy (I follow maybe a dozen small presses on Facebook). This is, in some ways, ironic (like posting a picture of an old photo to Instagram), but is also an indication of how optimized content marketing strategies can benefit any and all businesses, especially those that require the sort of grassroots community support upon which small presses thrive.

The language of dog and the tail

As new media continues to influence communication models, artists and marketers share many of the same communicative concerns. Filmmakers Adam Humphreys and Erik Stinson created a glossary of marketing terms specifically related to social media for Thought Catalog in March of 2011. While tongue-in-cheek in many ways, Humphreys and Stinson make a good point about the importance of a development of a lexicon for new forms of communication. And what is perhaps most engaging about the project is its target audience, who, according to the authors, “already get it.”

Their “Essential Names for Common Social Media Practices” include:

Although there are rules to follow to ensure you’re giving your content the best chance to succeed, the ability to think creatively, understand the process and write your own rules will almost always be rewarded in a commercial landscape where the arbiters of taste and the content creators work so closely, and with the same considerations in mind. As “the people who get it” continue to share knowledge and develop rules and best practices, they work in tandem with people who consider the actual social side of commerce and communication. As both groups feed off of one another, each independently has the opportunity to improve itself.