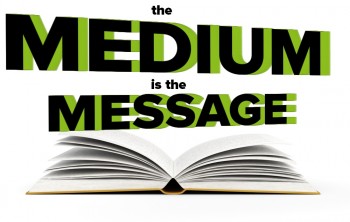 Theorist Marshall McLuhan, writing in his 1964 book Understanding Media: The Extensions of Man, coined the phrase “The medium is the message” to describe what he saw as the growing sophistication of content delivery systems. He posited that books, magazines, billboards, television programs and radio advertisements were all becoming so complex that their delivery methods were as important as their actual content.

That notion was developed 50 years ago – and content has become exponentially more elaborate thanks to technological advancements. McLuhan could never have conceived of social media, text messages and content marketing, but he would surely recognize that their forms are just as important as their messages. The internet has substantially changed how people read and consume information, and it’s essential for brands to realize this when they set out to produce content for customers.

Only about 20 percent of any given web page is ever actually read.

First, let’s get a bitter pill out of the way: Audiences don’t read most of the web’s 766 exabytes of content. According to the Nielsen Norman group, on average, only about 20 percent of any given web page is ever actually read. Content marketers might wonder why they ever actually write that much, given that such a big proportion goes unread. The reason is that most of the 48.4 billion individual web pages on the internet aren’t optimized for the way people read. But even if they were, no one would actually read 100 percent of any site.

There’s a fundamental difference between how users interact with web text and how they traditionally read the printed word. According to First Monday, an academic peer-reviewed journal of internet studies, scientists have discovered that reading from websites is neurologically and cognitively different than reading from a book, newspaper or pamphlet. The level of stimulus is so different that they’re essentially two separate activities, even if they appear similar.

The main difference is that people don’t “read” when they’re online – they scan. What’s more, they’re likely to scan in limited areas.

The National Dissemination Center for Children with Disabilities found that 80 percent of scanning takes place above the fold (what’s visible before scrolling) and 69 percent is on the left half of the screen. This might seem like lazy behavior, but it’s actually a sign of high literacy. The Nielsen Norman group discovered the higher the reading level of a user, the more likely they were to scan for particular words and phrases online, rather than reading word-for-word. In fact, it’s the lower-literacy users who will “plow” through text, looking at each and every character in the hope that they find the information they want. These days, the only time high-literacy readers digest every single word is when they’re reading for pleasure.

So how does this apply to content marketing? Brands need to think about their sites in terms of interaction costs. This phrase describes the time and effort readers have to put into any kind of media. Videos, for instance, have very low interaction costs because users just have to press play and sit back – which accounts for their popularity as a marketing tool. A novel, on the other hand, has a very high interaction cost. Perhaps that’s why the idea of literature marketing hasn’t caught on.

Online readers are weighing interaction costs a lot more, even if they aren’t consciously aware of it.

Prior to widespread adoption of the internet, readers didn’t have many options for media consumption – particularly when it came to the written word. There were newspaper articles, magazine pieces and full-length books – but little else. Today, they can look for information in 200-word blog posts, Tweets, white papers, long-form articles and everything in between. As a result, they’re weighing interaction costs a lot more, even if they aren’t consciously aware of it.

Properly formatted texts will be rewarded, and site producing content with high interaction costs will be punished with low readership.

Nielsen/Norman studied the effects of concise, scannable text and discovered that it yielded 124 percent greater usability. The more usable content is, the less likely readers are to bounce away and never return. When creating brand content, marketers must think about the following best practices to make information discoverable.

Links are another way to add emphasis – to a statistic, to the source of information or to a relevant term that needs additional attention.

The challenge of content marketing is to be the first resource customers find.

The vast size of the internet means that somewhere, after enough searching, users will find what they’re looking for. The challenge of content marketing is to be the first that they find. In many ways, it doesn’t matter if a site is selling a product or just sharing information – the knowledge economy of the internet means it’s in competition with other sites for eyeballs.

The eyeballs, quite literally, don’t like being fatigued. They want information with less struggle and low interaction costs. Using bullets, bolding and hyperlinks doesn’t coddle readers – it simply positions content the way that people are going to enjoy reading it. Doing otherwise just means that the bulk of the long labored-over words and carefully strung sentences are going to go unread.