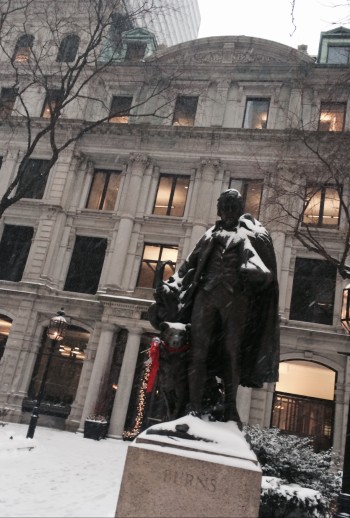 It’s hard to escape the song “Auld Lang Syne” during the holidays, whether you’re watching George Bailey discover life’s meaning in “It’s a Wonderful Life,” or celebrating the ball touching down with Ryan Seacrest. The song is ubiquitous in the late days of December and early January, especially right around New Years.

I did not make any New Year’s resolutions for 2014, but I always consider ways I can better myself – such as aiming for a some higher degree of mindfulness. So, last week as we welcomed in the New Year and the snow picked up in Boston, I took in the scene carefully while walking back toward Brafton’s Winthrop Square headquarters from lunch. For the first time, I paid close attention to that statue out front, noticing the nameplate, “Burns.”

The guardian of Brafton’s Boston headquarters

I asked colleagues on the editorial floor if they knew who the statue depicted, and many thought it was a statue of John Winthrop. Only about half of those I talked to did, indeed, know it was Robert Burns, but no one knew all that much about him or why he was there.

Here in America, Burns is most famous for writing the poem that would become the lyrics to that song you’ve been hearing so much of lately, Auld Lang Syne.

As described from Burns’ home country of Scotland, the poem Auld Lang Syne “recalls the love and kindness of days gone by … but it also gives us a sense of belonging and fellowship to take into the future.”

Through some research, I learned that when Ted Raymond bought 1 Winthrop Square, which used to be the Hearst building in the 70’s, he was in fact determined to get a statue of John Winthrop. Unfortunately for him, the most famous statue of Winthrop was in the possession of the First Church of Boston, which Winthrop himself had helped found; predictably, the church was not eager to part with it.

Still in need of a statue, Raymond spoke to the chairman of the Boston Art Commission, who suggested that he take our now beloved cast of Robert Burns and his dog Luath.

So that’s who’s perched in front of Brafton’s headquarters. I learned a great deal I’d never known, from the significant history of this building I walk into without thought each day, and as a general lesson on attentiveness. Take a hard look at anything around you for a moment and you’ll realize the incredible depth of history that exists behind even the most quotidian experiences and sights.