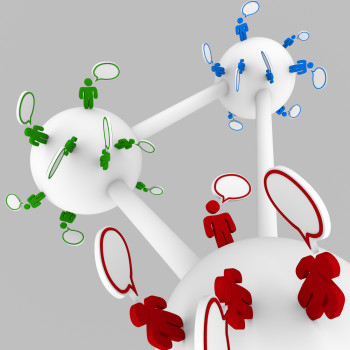 Social media is a load bearing wall of monumental importance in the colossal mansion that is the internet. Most people  understand this concept, and know social networks have surpassed the expectations of nearly every online ‘architect’ worth his or her salt.

When it comes to monetization and fulfilling business needs, social media marketing has found its cruising altitude, and it’s riding a smooth current of constant demand from organizations that understand its value and importance. However, turbulence can strike at any moment, so before it does – let’s examine a crucial aspect of social media and business – Language.

I believe that a business’ delivery of content across multiple social networks, or ‘social language,’ should never adhere to a one-size-fits-all approach. Despite the fact that communication across social platforms is becoming more like natural conversation, there’s no ‘right’ way of delivering social content.

Social language, like any other speech method, is governed by an exhaustive set of rules and there is nuanced ‘syntax.’ If someone +1s your comment in a Google+ discussion, it shows appreciation for your insight, but it also adds SEO value. On the other hand, a Tweet that receives a lot of ‘favorites’ indicates popularity, but won’t necessarily pack a punch in terms of ranking signals.

Let’s begin with the granddaddy of them all: Facebook for customer conversations

As I mentioned earlier, there is some common ground in the way users communicate across social platforms. For instance, a +1, Like, or Favorite will all convey the message: “Hey, I like what you’re saying here.” Of course, every social network has something that makes it exceptionally useful to a business, and in ‘The Social Network’s’ case, it’s customer service.

Facebook offers businesses the chance to interact with their customers on a one-to-one level, succinctly addressing concerns and acting as an effective PR machine all at the same time. Unsatisfied with the accommodations made for you by your travel provider? Send a Facebook message. Chances are you won’t have to wait as long for a response as when you emailed contact@restaurantname.com because a server was rude.

Customers can also receive immediate attention by writing on a company’s wall. When advertising the complaint in a public space, patrons actually do brands a favor by setting them up for a chance to shine in the customer service spotlight, and if they know what they’re doing, also receive instant PR. Firms are catching onto this. According to Sprout Social, “messages sent to brands requiring attention via Facebook increased 175% over the past year.”

There are two things businesses can take away from this:

1. Social media is not a place for auto attendants

2. Someone’s always listening on social media (we invented a term especially for it: Social listening), so firms should not get into the habit of deleting wall comments perceived to be negative. It’s a chance to give consumers a live example of how the customer experience is managed. #CXM, anyone?

The best part of customer service and social media? No elevator music…yet.

Next up is a heavy-hitting newcomer: Google+ for serious and casual communication

If Facebook is the place where companies serve their customers and pique public interest, then Google+ is where business gets done.

Google+ communities offer regulated environments where meaningful discussions take place. They are managed by administrators in a similar fashion as LinkedIn Groups, however, unlike LinkedIn, Google+ communities are uncluttered and are not the place to share blatantly promotional messages. Google+ a place where businesses and users alike can expect thoughts and ideas to be challenged by others. Not too long ago, I posed a question on an active social media community for a client, regarding GIFs, and got into a lengthy discussion with the community’s moderator about the GIF’s role in social media. I think I came out on top, thanks to a recent Brafton blog by my colleague Max, that served as a terrific resource (thx Max).

It’s a lost a place to have fun. After reminding users that September 19th was ‘Talk-Like-A-Pirate Day,’ I found myself in the midst of a conversation, on behalf of a client, filled with ‘Arrr, Matey!’s and talks of loot and plunder. So maybe not every conversation is the definition of ‘meaningful,’ but it got the point across, and it was a fun chance for the business to engage with customers. After all, Google+ is where business gets done and that sometimes means not just walking the walk, but talking the talk.

As you can see, the social language for Facebook and Google+ is vastly different. Strategies will likewise vary for other networks. However, there’s little reason companies should continue to stumble when using social media as a customer-centric channel when they understand a few basic principles:

b) Each social network is different and has individual value propositions

Let’s wrap things up with a final thought: With Facebook and Google+ in the bag, what else encompasses a social media strategy besides customer service and the nitty-gritty of business talk? I guess the only way to answer that is to stay tuned for: It’s not what you say; it’s how you say it: Social language Pt 2 (Twitter and LinkedIn).