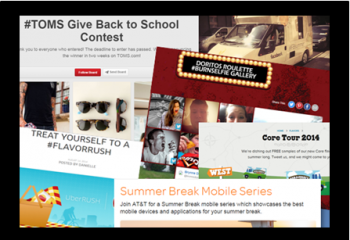 Doesn’t it feel like just yesterday was Memorial Day weekend and  summer marketing tips were the topic du jour?

This season’s top campaigns were dominated by SoLoMo (Social, Local, Mobile). We asked for input from our creative and social media teams – here’s a look at some of our favorite campaigns of the summer:

Tom’s Give Back to School Contest

The campaign: Starting in July, Tom’s created a Pinterest contest where it offered a $500 prize to users who created a “Back-to-school”-themed Pin Board, using Tom’s merchandise and the Tom’s hashtag. Plus, as a bonus element, they interviewed the winner in an exclusive blog post.

Marketing takeaway: Tom’s found a fun way to get users market its fall shoe collection. With a fun incentive, brands can invite user-generated content that does the product bragging for them.

The campaign: This summer Ben & Jerry’s teammates drove around the country to promote their new line of pints: Cores. Core Tour 2014 included West Coast and East Coast food trucks that delivered scoops of Cores on-demand. A tour schedule on the brand’s website alerted viewers when a truck was coming into town, and all they had to do was tweet at the brand with #CoreTour for a shot at scoring free samples. The tour is still going on, and the last stop is Boston, September 17 – October 15.

Marketing takeaway: This campaign further proved the obvious that people love free food, and since this event took place in the hot summer months it’s a no-brainer that ice cream was the best choice to give out. Spontaneous, on-demand deliveries of all kinds are continuously growing in popularity, and Ben & Jerry’s was the perfect brand to do it their way this summer. The campaign: Facebook’s ice-cream truck stopped by 22 agencies in London on some of the hottest days of July to share a sweet treat and talk about mobile advertising opportunities. Facebook shared treats, and also made sure to drop in a “special booklet serving up all campaign info.”

Marketing takeaway: Facebook used something fun, like ice cream, to talk business. When it’s summer and marketers will use any excuse to get out from behind their desks and into the sun, give them the opportunity!

The campaign: Lays and Uber teamed up to bring people in New York City free picnics through Uber Rush. The campaign gave people a reason to get outside, celebrate summer and participate in Lay’s Do Us A Flavor contest to pick new and exotic potato chip flavors. (We hope cappuccino doesn’t win!). And it proves Uber is committed to testing the waters about how it give its users unique and exclusive experiences.

Marketing takeaway: It seemed like a genius way to bring online marketing efforts offline … IRL. Sure, most people make product decisions before contacting a sales rep or viewing the product in person… But this should inspire businesses to go face-to-face with customers when they have a chance. The Campaign: In an effort to attract Millennials to AT&T products, the company hosted an unscripted reality mobile series on their social channels, aimed directly at teens. Because there were no scripts and it was filmed in real time, AT&T was able to “immerse followers in the drama as it unfolded, offering an unprecedented connection to the characters and their stories.”

Marketing Takeaway: Behold, the power of video — and knowing where to promote it. Make sure to pinpoint who you want to see your marketing messages. If you’re targeting Millennials, don’t put all your emphasis on Facebook – you’ll be more likely to find them on Tumblr or Snapchat – which is exactly where AT&T heavily promoted it.

The Campaign: Doritos created a user-generated photo gallery based on consumers’ facial expressions while trying out the new, spicy Roulette chips. The Campaign was run through Offerpop, a social contest platform. Although this campaign wasn’t exclusive to mobile, it’s interesting to note that almost all photos submitted appear to be selfies.

Marketing Takeaway: Doritos didn’t ask too much of their users, and they incorporated fun to garner UGC. Think about the behavior of your users when they’re not interacting with your campaign and mirror that: When it comes to Millennials on mobile, it’s likely to include selfies, Snapchat and Instagram. What were your favorite social campaigns of the summer? Let us know in the comments!