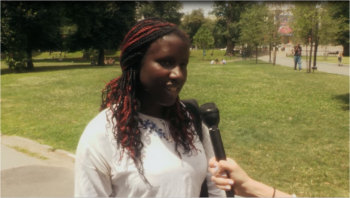 Google+ now boasts more than 400 million accounts … but only 150 million active users. There have been debates about the value of Google’s network for social media marketing, though marketers are quick to acknowledge a Google+ presence can enhance search visibility. On the other hand, Facebook’s dominance as a marketing platform is clear and undisputed, with the network used by 92 percent of social marketers.

We asked Boston dwellers (including locals and tourists, business execs and teens) about their use of Google+ and Facebook, and if, how and why they connect with brands on social media. Then we asked them to make a choice: A world without Facebook or a world without Google (spanning Google+ and Google search). Check out the video, and read the blog post below for the social media marketing highlights.

Google+ use: “You have no choice.”

The majority of polled people have a Google+ account, but they don’t use the network. A few claimed they don’t know anything about Google+ but are sure they soon will … As one man put it, with Google products, “you have no choice.” In a sense, this is true – months ago, Brafton reported that new Google service users are automatically signed up for Google+ at the time they create their accounts (Gmail, YouTube, Drive, etc.). The company is working to integrate all of its services, making the social network a key component of users’ overall Google experience. But attention marketers targeting young adults: There were some exceptions to the lackluster responses about Google+ – the (admittedly small!) sample of teens we spoke to use Google+ pretty regularly, sharing content within the platform (not just via +1’s across the web). Separately, Brafton has reported that 2.7 billion pieces of content received +1s in December 2011, which highlights the platform’s potential to enhance SEO presence.

As younger generations become active on Google+ action, the network may offer value in engaging these audiences. Moreover, millennial (and younger) adoption could signal that the platform will gain more followers with every generation that becomes active on the web. Remember those promotions for Google+ Hangouts with the Muppets? Google may be smart to target kids – the future social users!

While not everyone uses Google+, nearly everyone we spoke to uses Facebook – supporting the widely acknowledged truth that the platform offers unparalleled social reach. (The company recently announced it has more than 1 billion active users.)

Most said they use Facebook for keeping in touch with friends and family or sharing personal pictures, but sharing photos from across the web was also a hot activity. Marketers should remember that people love images on Facebook (and social media in general). A study from Dan Zarrella found photos win the most Likes, comments and shares on the site. Sharing custom graphics or funny brand moments caught on camera can help capture interest and shares.

Not surprisingly, most people said they Like at least one brand on Facebook. Industry data offers a somewhat cloudy picture of how frequently consumers Like companies. Some research suggests 79 percent of Americans follow brands on social media, while AYTM Market Research data indicates 73 percent of Americans Like at least one company on Facebook and 31 percent Like up to 10 brands.

Marketers trying to get an edge should bear in mind that people want exclusive content if they’re going to become a fan. Some of the top cited reasons for Liking a brand include:

Interest in product or service updates could pair nicely with the Facebook Want feature – currently rolling out to select partners. As Brafton reported, brands can create product collections (images) that users can opt to “Collect” or “Want,” and their product wish list will appear on their timelines for friends to see.

Google [search] is still the champ.

While brands might currently have a better shot at engaging social audiences on Facebook than Google+, Google seems much more closely tied to Americans’ everyday web routines. When we asked people to choose between Facebook or Google, Google came out the hands down winner.

You can do a lot more with Google. As much as I enjoy Facebook, Google has the search engine so there’s a lot more you can find out on Google than Facebook.

Marketers should consider that users are increasingly using the search giant to find product information in advance of purchases. Eighty-nine percent of Americans say search plays a role in their shopping research.

We’ve got more Brafton “Street Smarts” ahead to help you understand what audiences want from brands on the web!