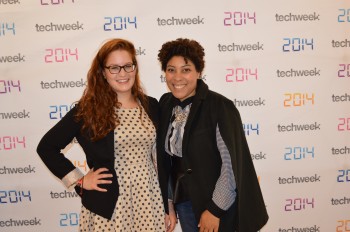 Brafton content marketers Hollie, Mike, Terez and Sonny ventured out of our Chicago office this week to attend TechWeek Chicago, a digital conference where hundreds of startups, major corporations and media groups rub shoulders and learn about the changing face of the digital marketplace.

The team was busy snapping pictures and live-tweeting throughout the conference and we’ve documented some of their favorite events and insights. Were you at TechWeek Chicago? Let us know what presentations you enjoyed most in the comments!

Being human. If content is king then context is emperor! @marclandsberg #TechweekCHI

As a marketer, always over communicate; don’t assume what your users or followers want/need – @marclandsberg #techweekchi

“Reporting capability is all about engagement in real time – Social Media is all about instant communication.” #TechWeekCHI @SproutSocial

@terezbaskin and I stopped by the @wordpress booth to grab a pic with our favorite CMS! #techweekchi pic.twitter.com/ODVdmjcD0j

As a marketer you are competing for attention. What are you interested in and how we can affect your behavior @tullman #techweekchi

Spend your time making sure your content gets to the right place at the right time. @tullman

If you’re still advertising, you really don’t get it. Build connections and customers’ loyalty, instead #techweekchi