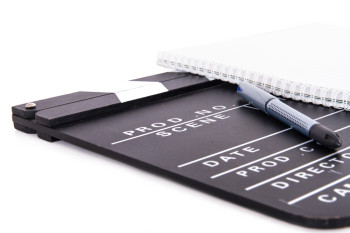 A local coffee shop put out a call to anyone with a video camera and a vision – $500 dollars for whoever can create viral brand content about the eatery’s signature drink.

The perfect idea came to me instantly. I opened my screenwriting software and watched as brilliant dialogue flowed from my brain, through my fingertips and onto my computer screen. Truly, I was writing the “Citizen Kane” of local coffee shop commercials.

The problem was, the contest rules clearly stated that the commercial had to be under 90 seconds. Now, having taken my fair share of screenwriting courses in college, I understood that one page translates to a minute on film. As I only had one minute and 30 seconds to work with, what was I doing with a five-page script?

“It’ll work,” I thought to my delusional self. “It’ll all come together in editing.”

Filmmaker on the roof

There I was, on a hot summer day, standing on the roof of a parking garage under a burning sun. I was dressed to play the CEO of a fictional coffee chain, while my two actors were in suits (basically, we were all pretty miserable).

As my crew and I neared an hour of filming on the roof, reality began to sink in. We’ve already filmed at least 20 seconds of footage and we still have several more locations to get to. Why was I spending so much time committing lines from my script to tape that did nothing to move this super-condensed plot forward?

Yes, you want to deliver a quality product that you’re proud of, but you also want to understand what you’re producing and why you’re doing it.

It became very clear that I was making a short film and not an effective commercial for video marketing. This was even more obvious after the clip was finished and I had a chance to view the contest’s competition – commercials that were very much, well, commercials. Some of my competitors managed to deliver their whole story in about as much time as one of my longest shots.

Did I win the contest? No. Did I make the “Citizen Kane” of coffee commercials? Of course. But there was a very clear takeaway from this experience. Yes, you want to deliver a quality product that you’re proud of, but you also want to understand what you’re producing and why you’re doing it.

Not everybody wants ‘Citizen Kane’

When it comes to online videos, people don’t always want to sit and watch a lengthy clip – even if they end up spending more time than it would have taken to watch it hopping from one silly cat video to another. According to 2010 research from Visible Measures, 20 percent of online viewers have no problem abandoning Web-based videos after 10 seconds or less.

As Brafton’s Video Production Coordinator, Timothy Griffin understands video, as well as what clients expect from the products in which they invest. Griffin told me Brafton typically aims to create videos that convey messages succinctly to stay in line with internet audiences’ expectations. “We know people watching videos online have a limited attention span, so they generally aren’t interested in watching something super long,” Griffin said. “For many people, if they click on a video and see a six-minute run time, they don’t even watch it because they don’t have that much time (or attention) available.”

This is something I learned with my commercial. The contest winner was based on which video received the most Facebook Likes. While we managed to nab second place (based on the number of Likes), we also had a lot of very supportive friends, and a good strategy for getting the word out.

However, when I scrolled through the list of Facebook users who had liked the commercial, there weren’t too many unfamiliar faces. Sure, there were a few, but it was clear that total strangers weren’t sticking around to like my film – err, commercial. Again, my entry was more of a short film, which may have been too much for viewers who came to watch and vote for a quick, viral clip about a caffeinated beverage – not an epic commentary on small businesses versus large corporations (yeah, it was kind of about that … and so much more).

While I don’t think I delivered a poor product, perhaps I would have received more Likes from strangers had I started my commercial with a bang. After all, that’s what Griffin says short video clips need.

“You need your videos to start with a bang. If you don’t, then viewers have LOTS of other options of things to watch.”

“Regardless of length, you need to have a good, strong opening that brings viewers in,” Griffin said. “You need your videos to start with a bang. If you don’t, then viewers have LOTS of other options of things to watch – like competitors’ videos.”

So when you sit down to write your script, feel free to put down as many ideas as possible. Just don’t get too attached to all of them, as you’ll want to edit. If you don’t edit during the scriptwriting process, your video editor is sure to have his or her hands full.

The last thing you want is to film everything from a bloated script and end up using only half of it. This approach can be especially handy on hot summer days, should you find yourself on the roof of a parking garage shooting an hour of footage, of which you’ll only use about 20 seconds.