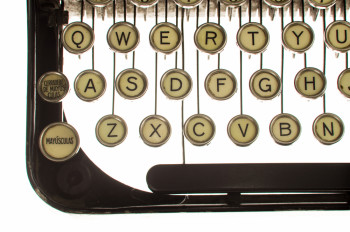 Content writers occupy a particularly unique space online. When I’m interviewing candidates for editorial positions at Brafton, I often find myself somewhat delicately talking about that space with regard to process, product and consumption. In abstract terms, I typically say that internet writers are not quite journalists, and not quite copywriters.

To say that they simply exist in between these established positions wouldn’t really be accurate either. Internet content writers don’t shirk the responsibilities of journalistic practice for the imaginative freedoms of creative copy, nor do they sacrifice the tools of a three-dimensional mindset that creative copywriters employ in the interest of objectivity. They may borrow certain conventions from both schools, but the quality “content”1 they produce involves an approach that is more like translation than anything else.

Translation has become more popular in the last decade or so, particularly with the rise of noted international authors who brought global narratives to the forefront of Americans’ reading lists. Famed novelists like Khaled Hosseini, Arundhati Roy and Jhumpa Lahiri caused a renewed interest in the value of translation and translated works, specifically those coming out of developing countries. But where does this popular phenomenon intersect with the professional writing world? What does World Literature have to do with marketing? What does translation have to do with reaching an audience of consumers?

What does World Literature have to do with marketing?

As the playing field levelled and global communication and commerce moved from the theoretical to the actual, our interest in translation, whether of languages or of cultural perspectives, has become about universality.

The problem is that as we migrate toward a need for universal communication, radical changes to language take place faster, and we sacrifice necessary components of a sophisticated lexicon.

Although an enormous consideration in marketing is your audience, from your perspective as a marketer, it’s necessary to understand your task as similar to that of a translator: Not only must you restructure your source material (i.e. interviews, industry benchmarks, client success stories and news articles) to translate literally, but you must adjust your work to consider the perspective of your readers, company goals, the brand and the climatic cultural factors to which your work will be exposed.

This is a tall order, and it is what links the careful work of translation with the equally painstaking task of effective content generation. Literal translation also adopts the model perfected by Salman Rushdie, according to literary magazine N+1. In “The Satanic Verses,” Rushdie created “his own English-Hindi-Urdu patois, in which he gave a revisionist account of the mingled, mongrel voices that went into composing the Koran.”

In an excellent analysis of the rise of World Literature, the editors of n+1 identify a particular convergence between the literary and the professional writing world that is echoed by theorists and marketers alike:

In the new millennium, literature has taken a Jason Bourne–like tour through the emerging financial capitals of what used to be the third world: big books about Mumbai and Beijing, Nairobi and São Paulo, have joined books about London and New York in a glittering constellation rotating across the night sky. In the new economic era of northern slowdown and southern catch-up, the exemplary novelists have seemed to be those, like Orhan Pamuk, Ma Jian, and Haruki Murakami, who successfully transcend their homelands and emerge into a planetary system where their work can acquire a universal relevance.

The convergence of the third and first world, though perhaps most interesting (at least to me) from a cultural and artistic perspective, is undeniably rooted in trade and finance. To ignore the practical applications of globalization would be to disregard the only tangible points of reference we have of understanding it.

Historically, commercial trade is a driver of, and sometimes necessitates, cultural exchange, and an understanding of each, as well as their internal relationship to one another (i.e. how a certain trade influenced a certain culture), is key to a comprehensive understanding of any component.

It must be noted, however, that many cultural (particularly literary) theories propose a distinct tension, if not an irreconcilability, between artistic expression and commercial ends. It may be difficult to connect, as I attempt to do here, yourself as a content marketer to Salman Rushdie. But you should try to, because the stakes are high and what you are producing ultimately matters.2

Consider the similarities: Rushdie created a hybrid language informed by a contemporary understanding of a very old, very influential and widely circulated religious text.3 That intertextual, expressive process isn’t too different from what marketing writers do every day.4

Marketers and writers who don’t equate, at least in principle, their development and use of industry jargon (think “leverage” or “twitterverse”) with the neo-descriptive work of Rushdie, are selling themselves short and doing a disservice to the models and algorithms developed to organically guide readers toward relevant content.

Marketers and writers who don’t equate, at least in principle, their development and use of industry jargon (think “leverage” or “twitterverse”) with the neo-descriptive work of Rushdie, are selling themselves short.

To say that the job of an internet writer is any less important than that of the novelist, playwright or poet would be to ignore one of the primary components of letters today. Franco Moretti’s bold (and probably calculated) claim that the next great movement in literary theory will involve data analysis and graphing rather than traditional close reading, is primarily based on the observation that close reading must, by its nature, ignore an enormous amount of literature.5 As our production of letters continues to increase and diversify with the advent of profitability and an increase in available channels for sharing, Moretti’s model seems to make sense. Moretti’s perspective is (almost unnervingly) reminiscent of Gottfried Wilhelm Leibniz’s 17th century attempts to create a universal language. Leibniz, best known as a logician and mathematician, believed that the key to creating one tongue was in analytics, rationalism and algebraic structure.

In light of the growing importance of content analytics and optimization in writing practices, it’s a concept that bears unpacking at length. But from a narrowly reductive perspective, it poses an interesting question: If we so frequently subject our language to sets of steps designed to solve problems (algorithms), at what point, if ever, does language bear the responsibility of tailoring itself to better suit the algebra?

There’s no question American and global lexicons are changing. The internet breaks boundaries that once slowed the spread of stories, messages and ideas. As a universal dialect emerges through conversations online and off, effective writers will continue to piecemeal a language that reflects their audiences’ needs, industry expectations and contemporary relevance.

1 I really wish there was another word for this. It sounds gastric. Or flagitious. Someone with more clout than me should work to develop a more favorable-sounding term.
2 I’m going to try to explain why in a minute.
3 This still feels like understatement. The Koran’s a pretty big deal.
4 Again, with some allowances made w/r/t commercialism. But n+1 does concede: “Global Literature can’t help but reflect global capitalism, in its triumph, inequalities, and deformations.”
5 Moretti calls this “the great unread.”