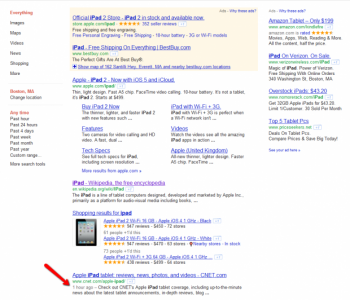 Marketers using SEO campaigns know by now their strategyies have to be living, breathing things. Setting and forgetting a keyword agenda just isn’t an option in the dynamic world search marketing. This week, we received a great reminder of this, as news internet marketing headlines spoke of everything from shifts in Google’s search algorithms to further proof of web marketing’s ROI.

Thursday afternoon, Google fellow Amit Singhal reported on the company’s official blog that a freshness algorithm has been added to Google’s search rankings to provide users with the most recent content relating to their searches.

According to Singhal, the adjustment will impact 35 percent of Google searches – mostly those related to current events and frequently updated issues or topics. Additionally, recurring events that aren’t necessarily part of the daily news cycle will be affected. Singhal used the example of weekly NFL scores and company’s quarterly earnings reports as events that searchers will be able to find more easily.

In the past, Google has been forthright about the value of publication dates when it ranks pages in search. The freshness update will make this even more apparent on SERPs.

Like most changes the company has announced, the goal with freshness is likely to improve the overall quality of search results.

In recent months, the quality of Google’s search results has come into question with the Federal Trade Commission and competitors wondering whether Google is manually manipulating its results to promote its own products. In January, Brafton reported that a Harvard law professor’s study concluded Google manually places it products as the top result in searches.

However, a study revealed on Thursday from the International Center for Law & Economics and George Mason University law professor Josh Wright says that statements of Google’s anti-competitive behavior or “bias” are wildly overblown. In fact, Google’s biggest competitor, Bing, is actually more likely to manipulate results, according to the study from ICLE and Wright.

Wright said that in his research, which was essentially the same as Edelman’s, Bing produced Microsoft products as the top result 14 percent of the time, while Google products came up as a No. 1 result in just 6 percent of Wright’s Google searches. Furthermore, Wright mentioned that SEO marketers and other companies should not concern themselves too heavily with this, as both are likely natural results and do not post any legitimate threat.

All things considered, Google likely doesn’t have much to worry about in terms of consumers – and marketers – shifting their focus to Bing. On Tuesday, Brafton reported that Google’s lead in the search market is unlikely to suffer anything resembling a fall in the foreseeable future. Overall, Google still holds two-thirds of total searches with Bing-powered search, (across both Yahoo and Bing) accounting for less than one-third of the market (29 percent).

For marketers looking to develop or tailor their SEO campaigns and keyword strategies to specific audiences, the same report provides even more useful insights. In the healthcare sector, Google searches account for more than 75 percent of all searches. Content marketing initiatives aimed at medical clients are most likely to boost leads and generate results when they include Google SEO. B2B, retail and financial searches were all also swayed heavily toward Google.

Boosting sales through SEO is ultimately the goal of any content marketing initiative. Sales begin with leads, and a study released by WebMarketing123 on Wednesday demonstrates that lead generation has benefited greatly from SEO campaigns. Polling more than 500 companies in both the B2B and B2C marketing sectors, the study found that SEO generated more leads for 57 percent of B2B marketers than PPC and social media marketing. Forty-one percent of B2C marketers named SEO as the most prolific compared to just 34 for PPC and 25 for social media marketing.

Generating leads through content marketing and SEO as part of a broader web marketing campaign help companies cut cost per lead by 90 percent, according to a study from MarketingSherpa. The firm reports this week that Shermo, a medical research company, used blog content marketing to draw its target audience to the website. The pages included links to surveys and calls to action, asking readers to become clients or at least subscribe to email marketing campaigns that provide further info (and further engagement opportunities for Shermo).

While Shermo’s campaign did not include any mention of social, the WebMarketing123 report demonstrated that social media marketing has led to sales opportunities for many companies using the channel. Fifty percent of survey respondents said they have finalized sales to leads generated from social media marketing. Facebook was the most valuable platform in this regard, with 41 percent of marketers saying they’ve closed deals among leads from the social giant. LinkedIn (cited by 21 percent) and Twitter (cited by 20 percent) finished second and third respectively.

Social marketing will likely receive a boost in 2012, as 46 percent of marketers say they want to learn more about the channel, and 60 percent plan to increase investment in social next year.

Currently, Facebook, Twitter and LinkedIn dominate enterprise social media marketing efforts. However, Google+ has spent the last few months trying to carve a place for itself among consumers. While it is still unavailable for businesses, a pair of announcements from the company this week will likely improve the network’s traffic and broaden its appeal.

On Wednesday, Google+ became available to Google Apps subscribers. Google Apps is essentially a personalized Gmail and Google Docs account for use in the workplace or a college or university. Before, users logged into these accounts did not have access to Google+, as it was only available to those with “@gmail.com” addresses. This means Apps users do not have to log out of their work or school email to access Google+ and they can +1 content across the web without logging out of their Apps account, which could be good for publishers’ social sharing figures.

Another Google+ update may be beneficial for businesses that practice news content marketing. The company announced that writers can be added to Google+ users’ Circles directly from Google News SERPs.

Brafton reported in September that niche leadership is a critical component of a SERP standing on Google News. As users gain familiarity with specific writers and return to their websites to access new content, it will likely help company’s standing as a thought leader within their niche grow – further boosting the ROI they receive from eventual investment in Google+ for social marketing.

As has been in the case with previous Google+ adjustments, marketers and Google+ users will want to watch out next week to see if the adjustments result in greater traffic numbers for the social platform. Marketers might also expect headlines from the upcoming ad:tech conference (and Brafton will have live coverage).