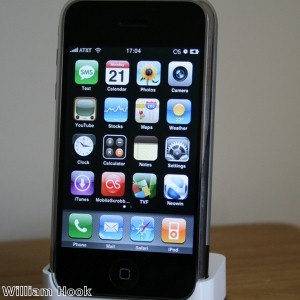 It wasn’t entirely positive, but news relating to Apple dominated web conversations this week. The company, which is notoriously secretive about product developments, has managed to keep any information about the iPhone’s move to Verizon under wraps throughout 2010. However, news broke late last Thursday night that Apple will likely announce the smartphone’s availability on Verizon in the days following the Consumer Electronics Show, which runs from January 7 through January 9 in Las Vegas.

It is still unclear when exactly the phone will be available for purchase, but some outlets expect it to come before Valentine’s Day when the Mobile World Congress meets in Barcelona.

For Verizon, Apple’s reported decision to delay the announcement until after CES is slightly problematic, since the company plans to aggressively push its 4G LTE network at the event.

With last week’s announcement that the Android-based HTC Thunderbolt will likely be among the first 4G options for Verizon subscribers, Apple can avoid being overshadowed by holding its announcement after CES. Still, some reports believe Apple will unveil the device at the event.

Whether an announcement comes at CES or not, Twitter users discussed the Verizon iPhone rumors heavily throughout Friday. Furthermore, Google Realtime search results for “Verizon iPhone” between midnight and noon on Friday showed a substantial spike in activity. Similarly, the same search on Google’s standard search page produced more than 900,000 results.

Tech pundits have praised the iPhone substantially since its initial release. Customers appear to be impressed with the iPhone and most other Apple products, according to a report from ForSee Results. The research firm listed Apple toward the top of its list of companies with the most satisfied customers. Apple scored an 82, which ranked seventh behind companies, such as Amazon, Netlflix, QVC and Newegg.

Boosting Apple’s appeal even further was Skype’s recent announcement that its video chat features would be available through an application on Apple’s iPhone as early as next month. While no date has been confirmed by either Apple or Skype, PC World believes Skype will make the app’s availability official at CES. Also unclear at the moment is whether or not the application will be compatible with Apple’s iPad.

Despite the boost Skype is likely to receive from its rumored Apple application, the company reported the cause of last week’s massive outage was outdated software. At the time of the outage, a Google Realtime search of “Problems with Skype” showed many users were frustrated with the service.

All Things Digital blogger Walt Mossberg also added Apple’s iPad to his list of 2010’s best products. Growing 4G networks received similar praise from Mossberg. While many consumers remain skeptical about 4G and its actual value, Sprint activated its 4G service in four California cities, including San Francisco and Palo Alto. Earlier this year, Sprint made 4G available in eastern cities, such as Boston and Baltimore; the California 4G locations bring the wireless carrier’s total to more than 70 cities.

While Sprint has struggled to gain market share in recent years, the presence of 4G Android-based devices has helped the company make some improvements. The release of the HTC Evo Shift, the second update of its currently successful Evo, will likely draw further interest from users looking to upgrade to a smartphone, 4G or both.

On Twitter, news of Sprint’s 4G launch in California became a hot topic throughout Friday.

Until the CES on January 7, rumors about new technology to be featured at the event will continue to surface. While most companies are hesitant to reveal any of their new products until their schedule times, technology pundits and others within in the industry will continue to pry. Consumers are anxious to learn of the new gadgets that will dominate headlines in 2011 and beyond, but no one’s saying anything. There will certainly be news from Google about its netbooks and Android operating system, while Microsoft will likely push its Windows Phone 7 mobile operating system.