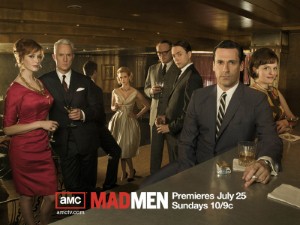 Marketers may love the glimpse into 1960s advertising offered by the hit television show Mad Men – but even if they don’t watch to get an entertaining history of the marketing profession, they can learn a thing or two from AMC’s marketing campaign for the show. AMC’s official Mad Men website offers users engaging, interactive content – including a “Mad Men Yourself” game that is proving to be invaluable linkbait.

In light of the show’s launch into the fourth season, AMC is uploading video clips from recently aired episodes onto its site, and it gives users sneak peeks at the coming week’s episode. Notably, the sponsors of these videos play into the 1960’s glamour of the show – a Clorox ad proceeding one clip shows how to get lipstick off of a shirt collar (which might be of interest to the show’s ad man Don Draper). Even the blatant advertising plays into the content users want, keeping them amused.

People who watch the clips online also have the chance to join in discussion forums about episodes. At press time, more than 1,400 commenters have participated in conversations about a show that aired less than three nights ago.

By creating a space for fans to share theories, AMC is ensuring that viewership and ratings stay high. The discussions keep people interested after the show ends, with many users agreeing to rewatch old episodes to build on their theories – and it’s clear none will miss next week’s show. (Notably, Coke is running a similar campaign for brand enthusiasts to engage each other on Facebook and let product users take over the buzz generation.) Plus, as Mad Men fans leave their comments they are invited to subscribe to AMC’s official newsletter, which could gain the network consumer loyalty.

AMC also invites users to be part of the world of the show. The site features contests giving consumers the chance to win a guest appearance on Mad Men and quizzes so users can see what job they would hold at Sterling Cooper Draper Pryce ad agency. But the piece de resistance is the Mad Men Yourself game, first unveiled last year. Users get to create Mad Men avatars, selecting the 60s-inspired hairstyles, outfits and accessories they would wear in the world of Mad Men.

The game is fairly simple – it relies on 2D animation, indicating popular games do not necessarily require highly sophisticated technology. Not only does Mad Men Yourself keep users engaged once they’re on the AMC site, but it also draws fans to the Mad Men homepage.

A Google search for “Mad Men Yourself” produces more than 2 million results. Most of these are other pages that link to the game – including popular sites such as the Wall Street Journal and the growing pop culture site VideoGum. The recently released film Inception is also catching online clicks thanks to its interactive Mind Crime Prevention game, which lets users feel as if they are a part of the story.

Though television and film may seem like two industries with a leg up when it comes to generating fantasy games for users, creative marketers in other industries should consider creating relevant activities that will serve as linkbait and get consumers involved with their brands.

Developing games to attract consumers to sites may be more important now than ever – a recent report from Nielsen shows that online games are the second most popular activity for consumers, outranking email and video viewing. In June 2010, online games accounted for more than 10 percent of U.S. internet time.