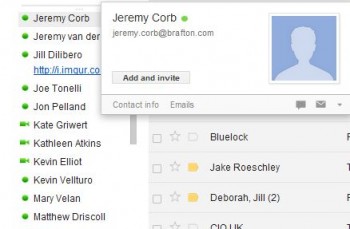 On Tuesday, Brafton spotted a new feature in Google Apps that allows users to add contacts to their Google+ Circles directly from the chat feature. The same test in a consumer Gmail profile did not offer the same functionality.

For marketers, increased integration of Google+ throughout Google services places a greater focus on including the platform in social media marketing campaigns.

When Google+ rolled out, those who use the company’s Apps Suite in the office and Gmail in their personal lives were frustrated by the lack of integration between the two accounts. Following the recent release of a feature that lets users with Google App and general Google accounts transfer their contacts, the integration of chat with Google+ makes the network even more user-friendly by allowing easier addition of contacts to Circles.

Making the platform as easy to use as possible without navigating away from other pages will help Google encourage users to make the site a part of their regular web use. Brafton has highlighted similar tools from the company, including the ability to add users to Circles from notification emails.

Recently, Google announced that its social network had more than 250 million users enrolled in its Google+ service. However, the main challenge for Google+ – and marketers trying to leverage the platform to reach social audiences – has been the activity of these users, which remains minimal in comparison to other major social networks.