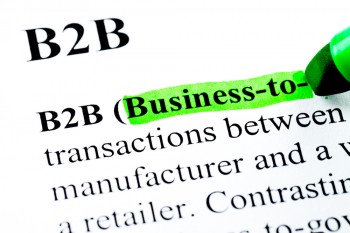 A lot of B2B marketers have it all wrong, according to a study recently published by Siegel and Gale. In an effort to appeal to other business professionals, they tend to overlook the buyer demographic that still has a significant impact on their bottom lines – consumers at large. Even if businesses aren’t selling directly consumers, they must still create brand content that educates and appeals to this highly influential group if they want to stand out and be successful.

It pays to get on the public radar

Based on the responses of 9,500 consumers and 450 business decision-makers about 64 top B2B companies, the study found brands that perform best are relevant on an individual level. The most successful companies also foster connections with consumers. In fact, companies considered “most-connected” had 31 percent higher revenue growth between 2010 and 27 percent better stock value.

Why would a B2B need to appeal to consumers if its business goal is to generate sales from other companies? There’s an underlying public opinion that influences decision makers. The study found that B2B buyers are 10 percent more likely to consider an organization that consumers are familiar with and feel connected to.

Naturally, businesses want to carry products that their customers know about and want. They’re more likely to buy products and services from brands that are in high-demand over organizations that aren’t on their clients’ radars at all.

To make this point clear, the report looks at organizations like Boeing and Intel. Boeing isn’t selling to consumers directly, but it should be working to win their favor. Empowered travelers can quickly determine which aircraft models each airline uses before booking flights, and they may choose to fly with the carrier that uses the provider deemed the safest, the most reliable or the most luxurious. B2Bs need to create custom content that makes their selling points known to the public at large.

Intel produces “multinational semiconductor chips,” a computer part that most consumers have never heard of, let alone understand how it works inside a computer. But what they DO know is that computers with the “Intel inside” sticker are made with quality products that are probably better than models made with technology from unknown suppliers. In the seven years after Intel launched its “Intel Inside” campaign, its market cap increased from $10.2 billion to $208.5 billion.

After Intel launched its “Intel Inside” campaign, its market cap increased from $10.2 billion to $208.5 billion

Despite these examples – and others like 3M, Microsoft, Bosch and Google – the prevailing belief is that B2B marketing defaults to boring. Whereas it’s acceptable and expected for consumer-facing companies to be funny, entertaining and engaging, B2Bs are seen as bold and innovative when they do the same. It’s time for a change, and brands can start with their content.

Rather than creating blog posts and social media solely for other businesses’ consumption, marketers must consider how their assets relate to consumers and convey their value propositions. If they can get these audiences engaged, informed and even excited about what the company offers, they foster demand for products and services at the ground level that will permeate to bigger business deals.

A good place to start is social media. This blog talks about the value of being humorous online, but also when to leave the punchline alone.