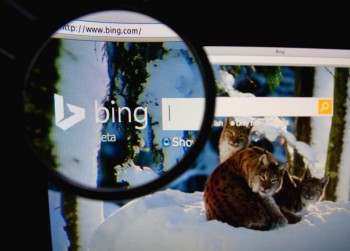 Bing is certainly not controlling the pulse of SEO or content marketing by any stretch of the imagination, but its second-place position behind Google (or third-place spot, depending on whose search industry rankings you believe) gives it a certain freedom to experiment that Google can’t afford. Hence the release of features like Cortana, the personal search assistant. Bing has also started deploying new search features that could one day affect brand marketing campaigns – or at least offer lessons for succeeding on the semantic web.

According to the Bing blog, music searches are getting a new SERP. Like Google, Bing has been showing previews of YouTube videos at the top of search results. However, they’ve recently stepped up their game and created an immersive new type of semantic search.

The new interface, Bing Music Discovery, is essentially an app within the Bing SERP. When users search for artists, songs or albums, they’re shown a dynamic carousel with further suggestions for listening. The implication is that the search engine knows people will want to view more videos after they’ve watched one, and the suggestions are ranked by how likely previous listeners were to click in the past.

Brands need to optimize their framework for capturing the buyer’s journey by taking into account an additional layer of clicks that stands between appearing in a SERP and arriving at a company’s website.

Even though it only applies to music videos for the time being, this is a glimpse of the future of search – one where users are even further encouraged to get information direcly from SERPs, rather than presented with external links to third-party websites. It’s a next step toward an internet of semantic search – where search engines strive to deliver answers instead of links to users.

Brands that are already conducting content marketing with the semantic web in mind should already understand how important branding and search funnels are to turning overall traffic into conversions. The latest trend here is a trade-off between increased overall visibility and a decrease in clicks. So brands need to optimize their framework for capturing the buyer’s journey by taking into account an additional layer of clicks that stands between appearing in a SERP and arriving at a company’s website.

For instance, videos can be organized with branded marketing intros, ensuring no matter where users see content, they understand where it came from. It’s also a good idea to expand call to action placement. Videos can include clickable pop-ups or banners, and written content can include prominent hyperlinked CTAs. This way, the semantic delivery method is irrelevant, and customers will understand which company produced the content they enjoyed.