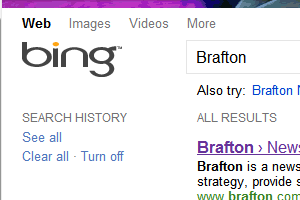 Bing seems to be opting for a sleeker search look. Earlier today, Search Engine Land reported spotting differences in the look of Bing’s SERP layout, and some sources at Brafton are also seeing redesigned Bing search results. Search marketers might take this update as a sign that the company is trying to improve its appearance and usability to gain a bigger following – perhaps especially in light of recent Google controversies that have many threatening to close their accounts.

Of course, those upset about Google’s Search, plus Your World, which brings personal data from Google accounts to individual results pages, might not like how Bing’s new layout emphasizes logged-in users’ Facebook icons on the search homepage. The Facebook “friend effect” has fueled Bing searches with Like data for months, and Bing’s new design features users’ Facebook photos much like Google features their Google+ icons. Users’ settings tab is also moved from the top navigation bar down next to their Facebook icons.

At this stage, other changes gathered about the new Bing SERP include larger query bars, “Also try” suggested searches under the search bar (instead of to the left of results) and an updated search icon.

This is a screen shot of the new/ trial Bing SERP:

Here is the older Bing SERP:

While Bing may be trying to step it up because of Google’s controversy (with Brafton reporting that Microsoft is fueling the flame of Google privacy policy concerns), the company has suggested that it wants to revamp search for quite some time. Nearly a year ago, Bing claimed it wanted to redesign search result layouts and users’ overall search experience.