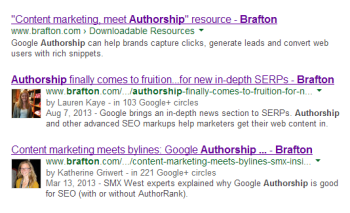 Just when it seemed like the benefits of Authorship hit the mainstream, rich snippets began to disappear. Part of a planned cutback, Search Engineer Matt Cutts warned webmasters late in 2013 that Google was going to reduce the number of rich snippets in search results by 15 percent. It was recently confirmed that Authorship snippets had been pared back, and writers who’d added the markup to their custom content wouldn’t always get thumbnail pictures and bylines in SERPs. Contrary to previous assumptions, Google isn’t necessarily reserving this coveted benefit for writers with the most authority.

It might be more accurate to say sites are the deciding factor in whether Author rich snippets are displayed alongside digital content, Barry Schwartz recently reported in a Search Engine RoundTable post.  Schwartz referenced a Google+ debate, in which Stone Temple Consulting’s Mark Traphagen said there are stronger correlations between a site’s quality and authority than an individual author’s clout.

“I’m also seeing cases where content did make a difference, sites where they lost Authorship snippets for pages like product listings or home pages, but retained them for real substantive content, such as blog posts,” Traphagen reported.

Download Brafton’s resource on how to set up Authorship, and check out our step-by-step infographic. Of course, not all pages – like product pages or the homepage – should be authored (read more in Brafton’s related Authorship in content marketing resource). But Traphagen’s theory raises an important point about the reduction of snippets in SERPs.

Most in the content industry initially believed the rich snippet reduction dealt primarily with Authorship, but it actually has a wider-reaching impact. When Cutts announced the plans to shave back this kind of result, he didn’t specify which type (Authorship, video, list, review, etc.) would be affected. Assuming that other types of rich snippets are dwindling, it makes sense that publisher authority matters more than individual author credibility.

Is Google going back on its word?

If domain authority is the root of rich snippet reductions, this may go against a statement Google made last year, declaring it had no plans for any type of Publishership in the imminent future.

The search engine has also made it clear that marketers shouldn’t expect AuthorRank, a theorized search technology that ranks content based on writers’ credibility, to come to fruition. However, more signs now point to a future in which content writer authority will be in the SEO front seat.

Schwartz also referenced a This Week in Google video that said the search engine is looking for an algorithmic way to promote the ‘good guys,’ or subject matter authorities, in search results. This sounds a lot like AuthorRank, and suggests the search engine may have the long-awaited technology in the works already.