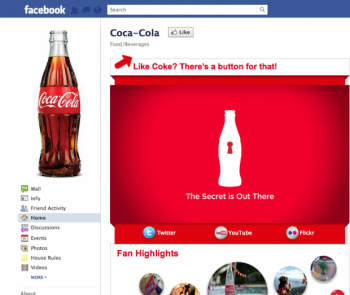 A new report from Covario ranked Coca-Cola as the No. 1 global brand in terms of social media marketing due to its massive brand outreach and visibility.

Covario says in its release that Facebook’s overall reach and user base makes it impossible for people to avoid the social network altogether. Coke’s aggressive social marketing campaigns appear more like stories than marketing messages. For example, the page contains a narrative, including photos and video content, describing how Coke gained a Facebook page after failing to move as quickly as other companies onto the social giant.

The campaign features user-generated content from “Dusty and Mike,” two Coca-Cola fans who encourage the company’s social followers to share content through Facebook or any other social platform, including Twitter and photo-sharing service Flickr. The social video marketing campaigns include seasonal elements, including an interview with Santa, and comedic celebrations of milestones the company reaches on its website. Brafton reported months ago that Coke was generating social buzz by allowing customers to share their compelling content, and now it is recognized as top in terms of social campaigns.

“Reach and engagement are particularly revealing,” Craig Macdonald, senior vice president and chief marketing officer of Covario, said in a release. “Several advertisers – Bayer and SC Johnson – have built followers, but their engagement statistics are relatively low. This is a huge branding opportunity for the firms.”

Brafton reported on Tuesday that social media marketing is one of the top three web marketing channels. With content marketing and SEO also on the list, it’s clear that an integrated web marketing campaign is best suited to help businesses build a web presence.