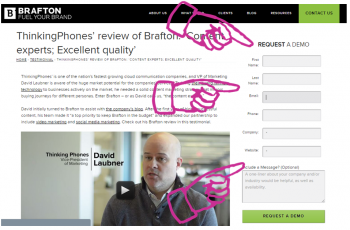 If you ask marketers the end goal of their websites, most say it’s a tool to bring in more leads and conversions. In fact, 3 in 5 marketers cite lead generation as their top marketing top goal for 2015.

However, many sites have form fills that aren’t set up for success – and marketers don’t always know they’re losing conversions. The number of required fields, the language you use and where you’re promoting your gated assets can have a giant impact.

Formstack’s Annual Form Conversion report studied more than 117,000 forms from 18,000+ businesses. Here are three takeaways all marketers should use to revise their strategies for more leads in 2015:

Last year, Brafton reported contests had the highest form conversion rate, at 28 percent. This number increased in 2015 to 35 percent.

Contests go hand-in-hand with social media. Conversion rates more than double when users integrate their forms with their Facebook pages – and custom hashtags for a contest can result in twice as much engagement.

Users need clarity about what they’re signing up for, and successful forms use language that leave no confusion.

You can figure out the language that resonates best with your audience through A/B testing. As Brafton previously reported, marketers say A/B testing is one of the easiest methods to perform, and 52 percent say it is also the most effective to increasing conversion rates. (Learn more about A/B testing here.)

You may have heard that the best time to Tweet is late night on Sundays. Or that webinars have the highest attendance rate on Wednesday mid-morning. So it shouldn’t come as a surprise that form fills have an optimal day and time too. Based on this information (and data from Google Analytics that shows when people are most likely to be on your site), marketers can optimize their promotion schedules for the maximum impact. Send social media posts with links at times when the industry sees the best response rates and set email campaigns to hit recipients’ inboxes at the peak hours.