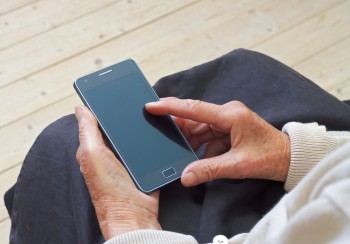 Marketers that haven’t yet acknowledged trends in device viewership can’t ignore it any longer: Mobile has exceeded desktop as the primary means of media consumption. According to an eMarketer study, 23.3 percent of all media – including written content, videos and images – was seen on a smartphone or tablet, while 18 percent appeared on desktop screens. Television is still leading the pack with 36.5 percent of media views, but it is trending downward (from 41 percent in 2009), and the lines between media delivery devices are blurring anyways.

Aging and socializing into mobile usage

One reason for the surge in mobile media consumption is age. Older Americans are quickly taking to mobile technology the way their younger counterparts have from the beginning. According to research by Nielsen, 51 percent of survey respondents over the age of 55 have smartphones and use them regularly. It’s becoming increasingly easy to reach people of any age, from any demographic, on a phone or tablet.

Another factor playing into the rise of mobile viewership is social media adoption. Twitter recently released its quarterly financial report, which includes user data. The total number of active monthly users is purportedly 225 million, but the real story is the 198 million of them who are predominantly mobile. In fact, the number of mobile users is up 31 percent from the same time last year.

198 million Twitter users are predominantly mobile. In fact, the number of mobile users is up 31 percent from the same time last year.

The good news about this uptick in mobile content consumption is that it’s becoming easier than ever to create web marketing materials for any device. In the past decade, businesses have gone from needing to create multiple versions of the same website, depending on how people are looking at them, to simply focusing on content creation, social interaction and branding.

It’s also essential to bear in mind how much more context users will be giving social networks and search engines going forward. It goes beyond geographic location, as companies like Google and Facebook are sitting on a treasure trove of contextual data that Brafton reported is becoming increasingly important to generating query results and keeping users in touch with one another.

The bottom line is brands should be putting as much information about themselves, their industries and their expertise on the web, on as many platforms as possible, to make an impact that resonates with the content gatekeepers of the future, as well as with users.

Think UX: 46 percent of searches for products are mobile [study]
Mobile search results to drive users to apps
Mobile use and data availability make search all about context [data]