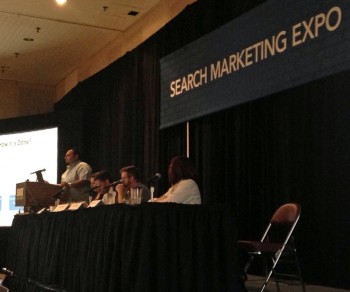 Authorship might be the “shiny, new thing” in SEO, but SMX experts (and Brafton’s strategists) agree it’s more than a flash in the pan. Theories of AuthorRank aside (and Google’s Webmaster Trends Analyst and SMX speaker Pierre Far says they are ONLY theories), the Author Badge is measurably helping results get higher click-through rates. Plus, the search giant has hinted that authority could become a ranking signal.

As with any new and buzzworthy thing in marketing, some brands are skeptical about why they should use Authorship. The SMX panelists shared insights on why Authorship is becoming a site essential and Janet Driscoll Miller, President and CEO of Search Mojo, shared an example of what she believes demonstrates undeniable impact on SERP presence.

John Shehata, Executive Director of Search and Social Media for ABC News, started the session with some quick insights on why businesses – and publishers – should be using Authorship:

Shehata gave a broad overview of the history of Authorship and patents that point to the potential for AuthorRank (more here). Shehata also referenced quotes from Matt Cutts about the future of search, which Brafton covered at SMX West, in which the distinguished Search Engineer claims:

“Over time, Google will care more about identity and social reputation.”

An argument for Authorship’s current impact on rankings:

Forget “tomorrow” – Janet Driscoll Miller, President and CEO of Search Mojo, said, pointing to a compelling example of what she believes is a smoking gun for the impact of authorship on ranking TODAY. Miller highlighted the case of one client, a respected (but unnamed) association. Her client seemed to get hit by Panda for duplicate content, even though this 100-percent-original content had been created by the company and was living on its site for quite some time.

When she ran a web search, she realized the association’s content was duplicated on the web, and another site was coming up in prime SERP real estate for content lifted from her client. The copycat site had low authority backlinks, and a comparatively low domain authority. However, it had applied Authorship for the plagiarized copy and was getting a rich snippet featuring a site contributor (who in no way produced her client’s content.)

“The association clearly had much more authority, but the other site was getting much more credit because of Authorship,” she said.

She made a really convincing case, but Far wouldn’t let her (or attendees) indulge the theory: “Authorship is not a signal.”

When Miller challenged him on this, he refused to engage further unless she would name the Association, and the conversation (unfortunately!) ended.

Marketers can be the judge… but there are still clear CTR benefits for Authorship. Learn more about Authorship and potential AuthorRank in Brafton’s free related guide.