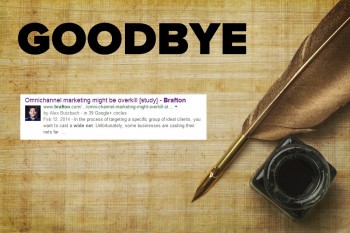 To close a month full of SEO updates, Webmaster Trends Analyst John Mueller made a big​ announcement out of left field in a Google+ post: The search engine is completely abandoning Authorship. Google isn’t just stripping images and bylines from SERPs,​ as it initially announced in July​ – it’s no longer processing authorship any differently from other markup.

What does this mean for your bylined content? The rel=author setup that links bylines to Google+ pages isn’t getting special treatment from Google’s crawlers. But readers might want to see Author pages to know what (or who) they’re reading. And Google issued such a statement in the announcement. Here’s what Mueller said:

“[Perhaps] your users appreciate being able to find out more about you through your profile.”

But if author denotation could be good for users, what made the company come to this seemingly brash decision? Mueller cited​ two main reasons:

“We’ve observed that this information isn’t as useful to our users as we’d hoped, and can even distract from those results,” Mueller said.​ ​A​doption of Authorship was low – or lower than Google would have liked. For every outlet like The New York Times that used Authorship markup, there was an equally prestigious journal (like the Washington Post, for example) that didn’t embrace it. With spotty adoption rates, a feature can only be so useful.

So where does this leave brands with content marketing strategies featuring Authorship? Here’s what to consider:

The underlying basis of Authorship still exists. ​
When Mueller was asked about the value of authority, ​his response​,​ “Links are links​,​” indicates Google is becoming better at performing the work ​intended for ​Authorship. Basically, a well-rounded online presence across platforms ​that is ​linked by an author’s name will still register with the search engine. Publishership lives on.  ​
Mueller said ​his change won’t affect Publisher data. As Brafton reported, Google has been adding company images to some mobile and desktop search results and could expand the practice to fill the vacuum left by the demise of Authorship.

Google+ ​contacts ​still shows up in SERPs.
Mueller also confirmed relevant Google+ posts written by people in searchers’ circles will continue to appear prominently in search results. So while Google+ isn’t going to be the interface for a system of Authorship, it will offer dividends to prolific content writers and G+ users.

Mueller is cautioning SEOs and webmasters not to worry about traffic drops, and as Google’s initial tests seem to show, clicks haven’t diminished. However, given the magnitude of this development, brands that adopted Authorship should pay close attention to traffic data over the coming weeks to confirm for themselves.

​At the end of the day, quality content from credible authors is still in line with all of Google’s best practices on how to succeed in search.

What about the long-discussed AuthorRank?

Barry Schwartz claims he’ll be doing a write up to a personal response he received from Google when he asked about the implications of an author’s credibility toward rank:

Still interested in how we got here? Check out these Brafton resources for more on the history of Authorship:

Have you noticed any changes in your analytics data since this change went into effect? Let us know in the comments below.