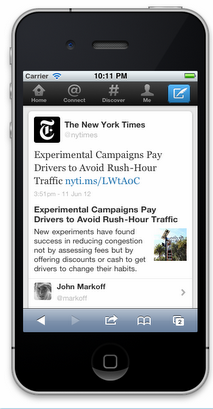 Twitter reported on Thursday that users now have access to an expanded Tweets feature that will help them preview longer content shared within Tweets containing links to external sites. To start, the previews will display for links to content only published by companies the company has partnered with. Despite the name of the feature, Twitter is still holding users to the 140-character limit. However, the expanded format refers to the ability to view snippets of news articles, images and other content on Twitter before going to a third-party site.

Currently, expanded content is available only for select publishers. Among the initial companies are The New York Times, The San Francisco Chronicle and Time magazine, and Twitter expects to add more moving forward. When users view content snippets from shared links, they are given options to click to read more, engage the Tweet that contains the link or (sometimes) follow the publisher directly.

According to the company’s blog post, other partners have been added to bring video content to expanded Tweets, while images will be more prevalent due to partnerships with Buzzfeed and similar sites.

There is no word as to whether or not the service will be opened to all users, but companies using social media marketing can already share images on the site. Whether or not brands will ultimately be able to get previews of their content available in expanded Tweets, marketers might want to consider sharing relevant industry news from media agencies that have expanded Tweets as bringing different types of content directly to the user can help improve engagement with users.

While typical Tweets containing text and sometimes links are critical to success, Brafton has reported that images are also a great method of improving engagement. A study from AYTM Market Research found that 65 percent of consumers prefer interacting with images on social networks.