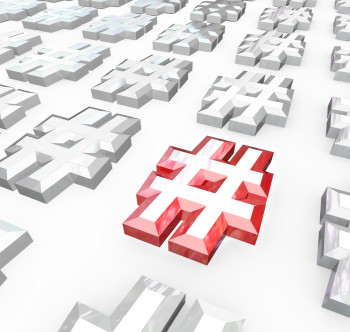 ​Twitter has owned the hashtag market since the social network’s inception, but a report from the Wall Street Journal suggests that Facebook might try to get in on the action in the near future. Hashtags help segment social chatter, so when a user clicks on the individual key term, he can see every post associated with the link and follow the online conversation. Marketers who create unique tags for their professional campaigns can learn more about their target audiences.

MarketingLand’s Greg Finn reported on Facebook’s potential hashtag adoption, writing that it’s hard to imagine how the feature would take off because of the social network’s enhanced privacy features. In some ways, hashtags flourish on Twitter because users keep their accounts open to the public, allowing these symbols to segment chatter and categorize conversations by subject matter. The Wall Street Journal’s Evelyn Rusli writes in her article:

“Facebook’s work on a hashtag is a sign of the heightening battle between Facebook and Twitter, as both compete for mobile users and fight for advertising dollars. For years, Twitter and Facebook seemed to occupy different poles of the social-media spectrum. While Facebook was the home of close friends and family, Twitter was the real-time broadcasting device for the rest of the world.”

It’s hard to believe that Facebook will change their behavior on the network and publish real-time commentary on Facebook over Twitter, but the social media giant seems to think it has some potential market share to gain by introducing the hashtag feature.

“​It seems obvious to me​ that Facebook’s​ choice to use hashtags ​is related to ​the company’s relationship with Instagram. Twitter gave birth to the hashtag, and even though hashtagging is less of a priority through Twitter’s new search capabilities, it just doesn’t seem right for Facebook to ​try and make it their own. Plus, Facebook isn’t really that great of a search-focused network” Brafton’s Social Media Marketing Manager Kristen Fritz said.

Social media marketing professionals should keep their eyes on new features, but they shouldn’t expect Facebook hashtags to put Twitter out of business or convince social consumers to abandon their handles from the start. Before worrying about adding hashtags to their posts, Facebook marketers should focus on the type of content proven to engage users of the social giant: As Brafton has reported, visual content has higher engagement and the new News Feed will make compelling images and graphics even more critical for Facebook sharing.