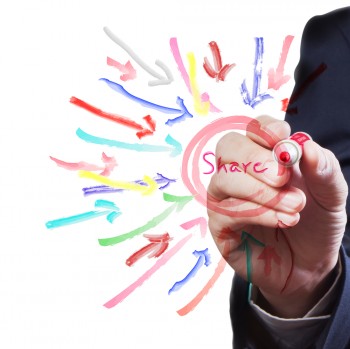 The evolution of search engine marketing is mostly defined by the transition from keyword-based queries to Google’s internally developed semantic search. Companies that could once pepper their websites with the right keywords, anchor text and hyperlinks are now finding Google is evaluating their pages with much stricter criteria. The ones that took notice early moved on to producing quality content and useful answers to user questions in order to drive traffic, and the result is the internet marketing landscape we see today.

Social media, which affects Google searches, but often operates according to internally established metrics, is experiencing similar growing pains. In particular, the “walled garden” of Facebook has changed its ranking system to control how much exposure companies can get from shared media, and there are valuable lessons to be learned from these alterations.

A tale of two social sharers

In December, Facebook tweaked its sharing algorithms to determine which liked and promoted posts appear in users’ News Feeds. Some serial sharers saw their traffic drop significantly. The biggest loser was Upworthy, which encourages people to pass around videos that range from cute animals to political speeches. The site lost 51 percent of its traffic, according to Digiday, while companies that are known for similar practices, such as BuzzFeed, did not seem to be penalized.

These two very different social media presences offer telling evidence of how content marketers should and should not share their content on Facebook. Considering that the social platform’s algorithms can be much more opaque than Google’s, any insight that we can glean from this example is valuable. If you’ve ever encountered a BuzzFeed article, you know that what you see is what you get. “22 Pictures Of Adorable Puppies” is almost always what it claims to be. In contrast, Upworthy capitalizes on users’ curiosity – for instance,”This Woman Was Embarrassed In Public, But You Won’t Believe What She Did Next [Video].” The BuzzFeed title is descriptive but intriguing, while the Upworthy one won’t help Google, Facebook or potential readers get at the true meaning of the piece unless they dig deeper.

The biggest knock against Upworthy is that it isn’t so much a content creator as a content aggregator. The catchy and intriguing headlines it uses to get people to click on links are its greatest products, but they usually just take users to embedded videos that can be found on YouTube or elsewhere. By contrast, BuzzFeed often creates original content. Ultimately, marketers should realize that even Facebook sees the importance of creating quality, original and unique pages instead of simply repackaging  to gain traffic.

BuzzFeed, you may or may not realize, has an actual news division and pays writers to create timely posts. In contrast, Upworthy is simply an aggregator of videos that may be recent but don’t necessarily provide value to people searching for information. Perhaps most tellingly, Upworthy’s contributors are called “curators,” while BuzzFeed employs bona fide reporters. Remember that content capable of responding to  actual questions that searchers want answered is the best way to gain visits. This is certainly true of Google, but it’s apparently of increasing importance to Facebook as well.

If reaching customers is your first priority, clarity and simplicity are important. Catchy titles are great, so long as they describe useful content that your company created. Social sharing is a great avenue to pursue, but remember that Facebook, like Google, will periodically clean house to keep high-quality content in high visibility positions.