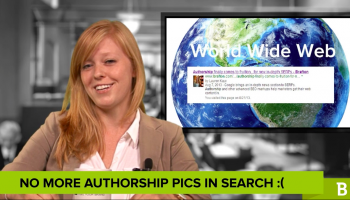 Right about now, is anyone else getting sick of Google’s way of running things? It sure feels like they pulled the rug out from under us with Authorship. Click play to watch the video below, or read on for the text version.

One day, they’re all about Authorship. People were advised to sign up, because once they had an account, they could get in authoritative users’ circles and boost their own rankings. Plus, they’d get an Authorship image if they set up their profiles correctly.

A couple of weeks ago, Google’s John Mueller posted on Google+, saying there was a change with the way it handled Authorship. An official announcement confirmed it. There will be no more author photos, clickable bylines or circle counts in search results pages anymore. Before you panic – It’s not all that bad. Your content will still be bylined, but people won’t be able to click your pictures to go to your Google+ account or see other posts you’ve written. However, if your content shows up in Google news, you’ll still get a thumbnail image and a hyperlink to your name.

There are plenty of theories for the sudden change. Some think it’s so people start to pay more attention to ads than organic results. Others say it’s to make the layout look less cluttered. It could also be that Google wants to pull back the reins on Authorship use, since a lot of marketers signed up for it knowing it would help them get more clicks and traffic. Other people hoped it was a sign of Google+’s demise.

Don’t give up on your Authorship just quite yet

We think there are still benefits for Authorship, and you should still use it for content that deserves a byline. It’s good for building brand awareness and authority.

We can’t be too surprised – Google has a habit of changing things on a dime – and the best we can do is adapt.  I mean, I’m a little disappointed that I’m not going to see my face on the internet as much anymore, but that’s the way the SEO world turns.

I’m Lauren Kaye. Thanks for turning in to this week’s Content and Coffee with Brafton.

To learn more about Authorship and how to capitalize on its benefits, check out our recently updated eBook: Content Marketing, Meet Authorship.