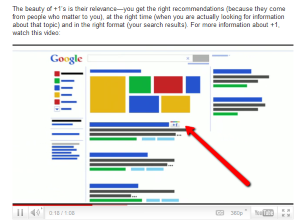 Google has announced +1, a recommendation tool that adds a social layer to general web results. The +1 service helps filter results for Google searchers logged into their Google profile accounts.

The company has been circling the social game for months now – from rumors of Google Me to recent speculations about a Google Circles service. And the company has continuously given its search results a social edge, with the latest development being updates that allow users to see results generated by their friends mixed in with standard web results.

Now, +1 realizes a long awaited Google social search tool. The company says it is part of its effort to “get you the most relevant results as quickly as possible,” and +1 is an instant marker that a result is “something pretty cool.” The feature will be rolled out soon, and users will soon have the chance to opt-in via an experimental search site.

With +1, users with Google profiles can “+1” content they find across the web (site owners will presumably soon be able to add the buttons to their sites). Web items that searchers recommend will be accessible via their accounts, so they can decide not to recommend a page at any point in time.

When consumers conduct general queries while signed into their Google accounts, they will see +1 recommendations tailored to them alongside results. Google explains that it will “use many signals to identify the most useful recommendations” for individual users – from chat buddies and contacts to (perhaps) Twitter connections. Users can specify who they are connected to in Google via their Google Dashboards under the “Social Circle and Content” tab.

Internet marketers will want to await more updates about their feature and add the +1 button to their sites. Google's new feature speaks to the rise of social recommendations in directing clicks.

Google's Matt Cutts has repeatedly spoken about the importance of social media marketing in boosting SEO, and +1 integration is just the latest development – marketers should also distribute their content to tried-and-true channels, including Facebook, Twitter and LinkedIn.