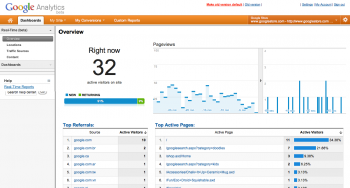 Google Analytics is inviting social media companies to integrate their various activity streams with its analytics services as a means of helping marketers understand the value of their social media marketing campaigns. With a number of platforms already on board, this update should come as good news to the 77 percent of marketers who are dissatisfied with their social analytics.

Google has offered social platforms the ability to integrate with analytics for free, as part of the social reports it will offer users next year, Phil Mui, group product manager, and Ilya Grigorik, engineering manager, wrote in the blog post.

According to Google, Delicious, Digg, Gigya, Reddit and Google+ are among the social networks already involved with with Google’s social analytics. However, the major players in the channel – namely Facebook, Twitter and LinkedIn – are absent from the list.The blog post, while addressed to all social media companies, is essentially an open letter to these major companies to work with Google to help social media marketing campaigns.

Facebook recently launched Insights to help marketers analyze their social campaigns, and the touchy relationship between the two companies makes it unlikely they’ll consider Google’s invitation. Meanwhile, Twitter, which offers an analytics package of sorts, is more likely to make the move, as any opportunity to prove its worth to marketers could benefit the microblogging site.

Of course, the site may feel its benefits are understood without Google Analytics’ help. Brafton recently reported that 15 percent of businesses named Twitter as their most effective tool in social media marketing, behind Facebook and LinkedIn. The organizations that find the most value with Twitter point to the engagement its drives as the primary benefit they draw from it.