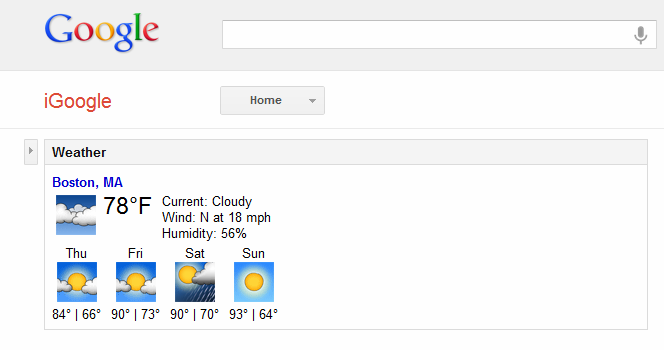 Google announced recently that it will discontinue iGoogle, it’s customizable Google homepage. The feature allowed users to create a personal homepage for themselves that included their various Google product and service accounts.

The company said that the service was an ideal way for users to organize their most frequent sources of web content in the past, but the development of both the Chrome and Android operating systems from Google necessitates a move away from iGoogle.

While the move may have limited impact on marketers’ efforts, as Gmail, Google search and other services will all still be accessible, users will have to start their web experience on another page. According to the company, the reliance on iGoogle is such that it will wait 16 months to remove the service entirely. Users have until November 1, 2013, to move away from the platform.

Other services that will soon be canceled by Google include Google Video, which was driven to obsolescence when the company acquired YouTube. The company stopped allowing uploads to the site more than three years ago, but the data still existed for hosting. Users now have until August 20 to remove it entirely. The Symbian Search App will also be discontinued. The mobile operating system, which once was the most popular in the world despite a limited presence in the U.S., has fallen off entirely.

While the blog details major changes from Google in terms of eliminating certain products, Brafton has recently highlighted a number of new innovations from Google, including aggressive moves to make Google+ more popular for users and social media marketing campaigns.