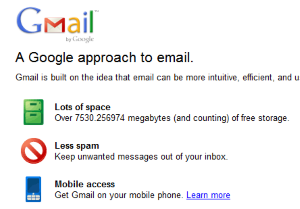 Brafton has reported that email is one of the most effective and cost effective marketing channels. At the same time, we have covered the anticipated rise of the display ad platform in 2011 . Now, Search Engine Land reports that Google may be bringing display ads to Gmail.

In what seems to be a tested feature, Search Engine Land's Greg Sterling reports that he saw a display ad in his Gmail account this morning. He saw an image ad for organic shirts next to an email from a retailer.

Google has not made any official statements about display ads in its email service, but this feature may soon roll out to all users. As Brafton reported last summer, Google expanded its Display Network to include Gmail, so email display ads seem to be a natural development in Google's plan to push display past its “tipping point.”

For marketers, this could mean they may soon have the opportunity to reach the rising Gmail user base with display ads related to the emails in their inboxes. At the same time, while many marketers are buzzing about the development of display ads across the web, they might want to consider how consumers respond to these ad units.

Impressions are inarguably on the rise (with Facebook driving growth), but a study covered by Brafton back in Novemeber indicates that nearly half of consumers say display ads are the internet ads they are most likely to ignore.