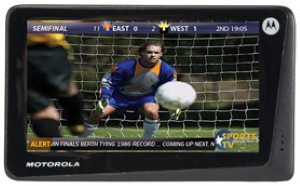 Months ago, Brafton reported that Google released Google TV, and marketers may want to practice search engine optimization with living room screens in mind. Yet, with the new year fast approaching, some sources say Google has halted production of its set-top boxes in spite of the continued rise of online video viewing.

This week, officials at Google told PC Magazine that it was nothing more than "rumors and speculation" that Google had instructed Logitech to stop making Google TV set-top boxes. Google spokesperson Gina Weakley told the source Google's long-term goal is to "help drive the next-generation TV-watching experience, and we look forward to working with other partners to bring more devices to market in the coming years."

Nonetheless, internet marketers might note that Google TV is not gaining the attention and acclaim surrounding its initial release. While online video viewership is on the rise, marketers may not want to worry about living room screens just yet.

Instead, brands should consider creating video content for mobile online audiences in 2011. As Brafton has reported, a Nielsen study shows that mobile users watched more video content on their mobile devices during the second quarter of 2010 than ever before. Twenty-two million mobile subscribers reportedly watched online video content while on-the-go.