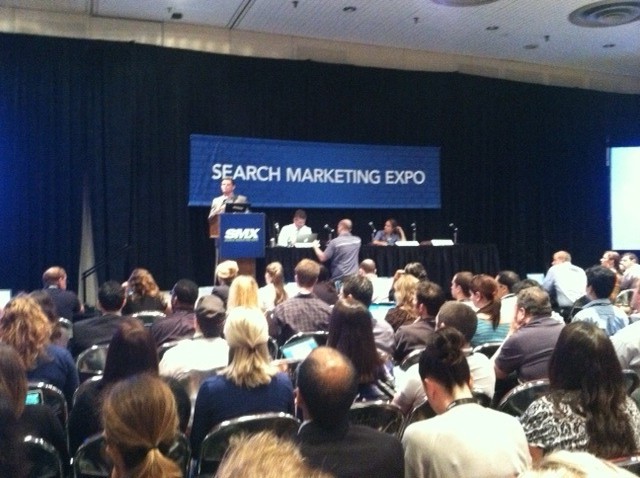 At this week’s SMX East conference, Google product manager Christian Oestlien and Google software engineer Tiffany Oberoi gave attendees a closer look at Google+, as well as some insight on what marketers might expect in the near future from the search giant’s social network.

The session started with an overview of the major Google+ features, and then the Google execs introduced a new feature the company is testing that paid search marketers may like. At first, it seemed that celeb endorsements and friend +1’s would be visible on paid search ads, even impacting which ads consumers see. However, Oestlien clarified that celeb endorsements for ads are still being tested – and he wouldn’t say much about whether friend +1’s (or aggregate +1’s) will impact paid search results Google+ users see. In the screenshot he shared during the session, Kim Kardashian had publicly endorsed Sears with a +1. (Search Engine Land appears to be part of the test and has shared this screen shot, featuring a Sears +1 from Khloe Kardashian:

Oestlien further explained that Sears had told Google the Kardashians are supporting the department store (and its Kardashian line). He suggested there are a number of advertisers working with the company on this test.

In other Google+ news marketers may like, Oestlien and Oberoi said that Google engineers had hypothesized that friends would take advantage of opportunities to share with Circles and their theory is proving correct. This could be good for content marketers hoping to gain visibility among the Google+ crowd via +1 sharing. Although he didn’t give specific sharing data, Oestlien cited the widely reported stat that the +1 button receives 4 billion daily views.

Also, Oberoi confirmed that Google is testing +1 as an SEO ranking signal, which might mean businesses that have the button on their site are eligible for improved rankings while those without it miss out. She emphasized that – as with traditional links – paid +1’s would be deemed low-quality. Also, she suggested that Google would consider using as much social info as it could to evaluate organic listings, but the company does not have access to Like data…

When it came to questions of when Google+ will enable business profiles, Oestlien was – again – very tight-lipped. He said that the feature would be “coming soon” and explained that delays are an effort on Google’s part to ensure that company identities are secure.

Social Media Today reports that Google is testing business profiles for Google+ with Ford. The source offers some insight on what Google+ branded pages may look like based on Ford’s page.