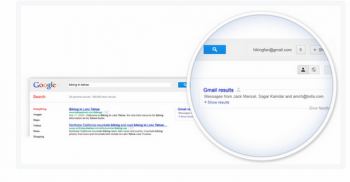 On Wednesday, Google rolled out new features to users around the world, aimed at providing more relevant, personalized answers to their queries. While search users in the U.K. and other non-U.S. English-speaking countries received Knowledge Graph for the first time, American users now have the opportunity to include their emails in their own search results. In its blog discussing the feature, Google said email content from a personal Gmail account will be included on SERPs. Email marketing campaigns could receive increased attention when users search for related material.

While many have complained about the excessive integration of different Google services, this feature is not rolled out entirely yet. In fact, anyone interested in testing it has to enroll before the feature goes live. Those opting to activate the tool will see a “Gmail results” menu on the SERP that they can expand if they think the information is relevant to their current search.

Gmail integration is unavailable to Google Apps users, so only owners of personal Gmail accounts will have access to the feature. It’s unclear whether or not Google plans to make this a standard part of the user experience moving forward. The first 1 million users to signup for the test can access it during the trial.

Businesses may be pleased that their email marketing messages can now win search visibility among those who opt into the feature. Other examples of its utility Google provided in the announcement included flight information included in emails. With the search addition, a user can quickly access their flight plans from search, rather than navigating back to their inboxes.

Brafton has often highlighted the value of integrating email marketing campaigns with other channel efforts. Enrolling consumers to receive these campaigns and sharing highly relevant content with them could become even more valuable should this feature succeed and become a standard option for Gmail and search users. It’s unlikely that the move will have any direct SEO implications for companies, but it does add potential for another appearance on a SERP.