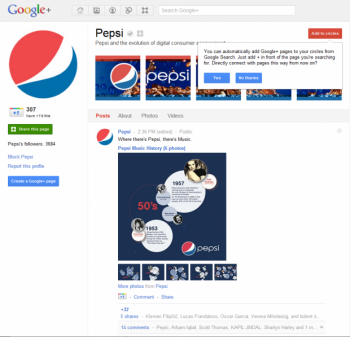 A report from Experian Hitwise shows that Google+ received a massive push last week, as the website received more than 6.8 million visits – 5 percent more traffic than the previous week and 25 percent more than the same week in October. The figure represents the third largest week in the social network’s young life.

Propelling the traffic spike was the announcement of Google+ Pages earlier in the week. Pages allow businesses and other organizations to use the website as a social media marketing platform. For marketers, the announcement was long overdue.

Prior to last week, Google+’s two most successful weeks came in late September, when it removed the invite-only wall. However, the lack of general traffic to the website and content shared by users provided little motivation.

Some have been frustrated by the staggered release of various features. Even the eventual release of certain capabilities, Pages for example, seems incomplete, as businesses still cannot use multiple accounts as administrators on their Google+ Page.

Google+ has announced some other capabilities that will help social media marketing efforts. Content distribution is made easier by Google+ integration with third-party social media applications, such as HootSuite, which came on Tuesday, Brafton reported. Even there, some were dissatisfied, as popular third-party application TweetDeck was not included in the six-platform rollout.

The addition of Google+ is changing a number of Google’s search services. On Wednesday, Brafton reported that a Verbatim search tool was added to Google search to to allow users to find results containing only the exact term they searched for. Previously, the addition of the “+” character to a search query would do the trick. However, Google altered this in favor of Direct Connect. Now, the addition of the “+” in a search for a business will take a user directly to the company’s Google+ Page.