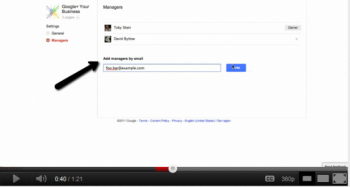 Google recently announced some adjustments to Google+ that may make it a more effective tool for social media marketing campaigns. The primary addition is the ability to add multiple administrators to Google+ Pages, the platform’s branded offering for businesses.

Previously, only one Google+ account could be used to manage a business’ social media marketing effort on the platform. Opening the service to Google Apps users was a big step at first, but businesses became frustrated with the single administrator standard for company profiles.

Google+ has been something of a work in progress since its launch in late June. However, the company has slowly and steadily rolled out new features as it collects feedback, and user-conscious updates make the platform a viable competitor in the social marketing (and overall social media) space.

According to Google, as many as 50 people can be added as managers of Pages accounts.

Other additions include Notifications, which allow Google+ Pages managers to see who has interacted with their accounts. This feature was always available, but many Pages administrators said that the feature malfunctioned for some time.

Finally, Google explains that the two different account popularity metrics – followers and +1s – are now differentiated more explicitly to give users a better idea of a Page’s true reach. Prior to the move, some had expressed confusion over the two metrics, and their meaning for companies.

In addition to these updates that make social media marketing on the platform more simple, Google has expanded the potential visibility of Google+ Pages. Brafton reported earlier this month that a business’ Google+ Page is now visible on SERPs when a user enters a query for company name.