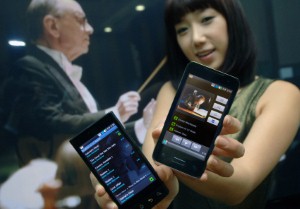 Google's share of the overall search market may be flattening, but the company is poised to maintain its strong lead in the mobile search market. The latest mobile subscriber report from comScore indicates that Google's Android platform is the market leader by a long shot.

The comScore report reveals that Google's Android operating system is used by more than one-third (34.7 percent) of the 72.5 million U.S. smartphone owners. Android devices have gained 6 percent market share over December of 2010, when they accounted for just 28.7 percent of the smartphone market. This supports Nielsen data indicating that Android devices are the most desired smartphones among consumers.

Meanwhile, RIM's market share fell 4.5 percent, from 31.6 percent in December 2010 to 27.1 percent in March 2011. This is may be bad news for Microsoft – the company recently announced a partnership with RIM that makes Bing the default search engine for BlackBerry. While the alliance can still help Bing gain ground in mobile search, RIM's falling numbers suggest marketers should stick with Google when trying to catch clicks from on-the-go shoppers.

Notably, SEO for mobile search is becoming an important strategy for internet marketing. The comScore report reveals that using a browser to search the mobile web is now the second-leading smartphone activity (following text messaging). More than 38 percent of smartphone users browse the web by comScore's count, and a Google report indicates that 77 percent of smartphone owners use search engines while on-the-go regularly.