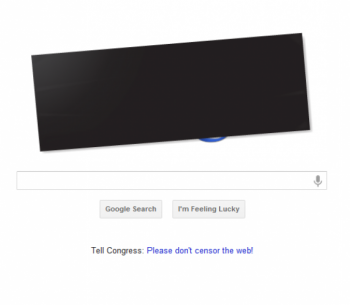 Some of the most frequently visited websites have gone dark on Wednesday to protest the Senate’s Protect IP Act and the House’s Stop Online Piracy Act.

Both bills aim to stop the illegal sharing of copyrighted content on the web, but critics say that the language in each bill is too broad to be enforced effectively – and internet marketers worry it could lead to their sites being shut down without warning.

Under each piece of legislation, ISPs, ad networks and major websites, such as search engines, would be forced to be more vigilant in their fight against piracy.The issue for Google, Facebook, Twitter and the other major internet companies and organizations opposed to each bill is that they do not believe it is their responsibility to police the web.

Currently, Google and other legitimate websites allow copyright holders to submit requests for removing content under the Digital Millennium Copyright Act. According to Google, it typically responds to requests it can substantiate within six hours.

Among the symbolic protests on the web are Google’s blacking out of its logo, along with Wikipedia, which is essentially shut down for the day. Users can go to Wikipedia.org, search for a term and land on the page. Within seconds, though, they are met with a black page with the following message, “For over a decade, we have spent millions of hours building the largest encyclopedia in human history. Right now, the U.S. Congress is considering legislation that could fatally damage the free and open internet. For 24 hours, to raise awareness, we are blacking out Wikipedia.”

The page includes links a Wikipedia entry detailing the organization’s opposition to SOPA and PIPA. Also, users can enter their zip codes to find the information for their senators and representative in Congress to voice their own stance against SOPA and PIPA.

Facebook and Twitter were both outspoken in their concern over the bills, however, like Google, going black for an entire day was simply not an option. Users of the websites are conducting their own informal protests. “Stop SOPA and PIPA” is a trending topic on Twitter throughout the United States at press time, and many are tweeting, “Stop Piracy, Not Liberty,” to admonish the bills but support the basic idea that illegal content sharing and distribution is a problem.

In terms of searches for the SOPA blackout, seven of the top 20 trends on Google Trends were directly related to the bills. Among the top search phrases are “sopa blackout,” “pipa” and “sopa bill.”

For marketers opposed to the bills, the fervor could result in some strong content marketing opportunities. Developing articles and other content that discusses the effects SOPA or PIPA would have on a business could provide insights to prospects while attracting searchers.