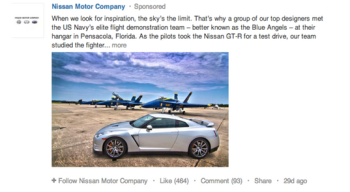 Brafton recently covered a faberNovel study, which suggested that LinkedIn was the social network with the most untapped potential. With more than 200 million users and 3 million companies on the site, LinkedIn has established itself as the leading professional network and appears to be making a play as a content aggregator as well. Now the site is bringing sponsored updates to news feeds, which it promises will be hyper relevant to members’ professional interests. However, the ultimate beneficiary may be the brands that buy ads to give their social media content more exposure.

LinkedIn has been experimenting with sponsored ads for the past six months, but plans to roll them out to all users, the site stated in an official blog post. Well-known brands like Nissan, Xerox and Adobe have already embraced this resource to get their web content in front of targeted B2B audiences.

To assuage members concerns that sponsored content might spam up their feeds, the site assures that it’s “focused on delivering posts that will be relevant to you. Just like other content in your feed, we will gauge your engagement with Sponsored Updates and aim to surface posts that will be useful to you.” That being said, LinkedIn also allows its members to hide sponsored updates that display in their feeds, and users’ homepages will still be dominated by organic blog posts, news articles and opt-in web content. Given this split, marketers might find their social media marketing on LinkedIn has the most traction with both paid and organic efforts. Populating followers’ feeds with timely messages will keep brands’ names fresh in prospects minds, especially when they’re considering which businesses may offer new sales opportunities in the future.