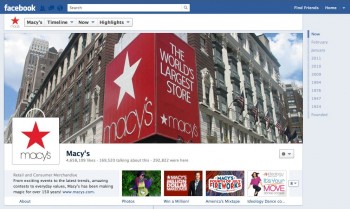 Facebook brand pages started receiving updates on Wednesday to more closely resemble the Timeline feature, which consumer users have received over the last five months. Facebook and Macy’s announced on Wednesday that the department store giant would be among the first companies to receive the new prole layout.

Facebook made the annoucement at fMC, currently ongoing in New York, saying that Macy’s massive brand appeal, 4.5 million fans and reputation as an ecommerce leader made it an ideal fit for the first wave of rollouts. Choosing a company like Macy’s, which appeals to multiple demographics, demonstrates Facebook’s commitment to make social media marketing campaigns appeal to all users.

Macy’s said that the ability to leverage both the visual and text elements of Timeline makes it a compelling platform for social media marketing.

“Storytelling is such an intrinsic part of Macy’s DNA, and Macy’s Facebook Page allows us to give our fans a platform where they can share their own stories and memories about their experiences at Macy’s,” Martine Reardon, chief marketing officer for Macy’s, said in a release.

On Tuesday, Brafton highlighted a report from TechCrunch, which suggested that Facebook may also use fMC to roll out its new Real Time Insights platform. The updated social media marketing set of metrics will provide businesses more frequent, timely data on the success of its campaigns.